Cloven Hoof - Who Mourns For The Morning Star? 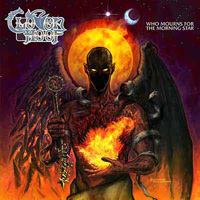 NWOBHM is a rather wide definition of music, whether the weight is on Hard Rock or leans towards Heavy Metal. CLOVEN HOOF definitely stretch over the whole spectrum with everything from very Heavy and Epic tracks to rather light weight Hard Rock is featured on all of their releases while sticking inside the borders to keep the records as an a solid entity. It's the same with “Who Mourns For the Morning Star?" which starts with the heavy "Star Rider" after the DIO-esque intro that sets a good mode straight off. I love the changes in the track and that the music pauses a little with the riff taken down in terms of intensity during the chorus. This track struck immediately, it's catchy and heavy. The very mellow verses in “Song Of Orpheus” with a very high-pitched vocal line felt odd on the first spin but the more I've listened the better it got and the contrast towards the chorus worked perfectly in the end. The dynamics and stomp in the chorus-line really make a difference.

It's been rather quiet in the CLOVEN HOOF camp for a few years now though, and the band has gone through a massive change since “Resist Or Serve” which was released in 2014. It's just the main man Lee Payne and Chris Coss left in the band from that time. Guitarist Luke Hatton has been a part of the lineup for a few years now. Also, new is drummer Danny White and vocalist George Call, both from the US Power Metal band ASKA (both also ex-OMEN). What's remarkable is that they're Americans; one could think it would be easier to have the members living closer. It's not surprising that they were tapped though, since both are fantastic musicians. This also meant that Joe Whelan is out too. He was a great singer but there's no doubt that George is one step up and a much better fit for the band (both when it comes to George's vocal style and his whole appearance).

Comparing “Neon Angels” with the heavy "I Talk to the Dead" and the aforementioned tracks, it is a real light-weight with Hard Rock oriented riffs and a very catchy chorus-line. Variation and dynamics are the key to success! One thing that struck me with "Who Mourns For The Morning Star?" very early was the geniality of the production; the balance between the instruments is absolutely fantastic straight through while the sound is organic and full. I really love the guitar-sound, the round distortion and how is still clear and edgy. Then, most of all, which is most prominent in the title track “Morning Star” are the vocal arrangements. George has a fantastic range and flawlessly nails all those extremely high-pitched lines and falsettos. Just listen to the heavy passage when the song goes from acoustic to electric; the layers of voices and harmonies generate a very big sound and that passage sends shivers down my spine every time it comes on. The MAIDEN-type riffs and arrangements work perfectly and, really, doesn't get much better than this.

The speedy “Time To Burn” should work perfectly live, being a great classic Heavy Metal track. It still has that touch that makes it CLOVEN HOOF with some oddities and tricks in the arrangement of the song to break it up. “Go Tell The Spartans” is of course, very different style-wise but that one too holds these small details that makes it to grow with each spin. And again, the last song out, “Bannockburn”, has yet another great structure and style but it's the same thing here. You see, “Who Mourns For The Morning Star?" sounds good from the start but there is more to it than a bunch of good Heavy Metal songs. It is when the record settles, it starts to shine for real. And when a record keeps growing as this one does, it's on its way to become a classic. So, it can absolutely be listed up there with the “The Opening Ritüal” EP or the CLOVEN HOOF self-titled debut and “Dominator”. It's perfect!