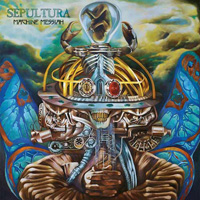 SEPULTURA’s trademark sound started to take shape on “Arise” or even more at “Chaos A.D.” in the first half of the '90s but perhaps had not fully settled until “Roots”, released a few years later. For the last two decades, it’s Andreas Kisser who’s been carrying the flag and continued on the set path.

It was a surprise though when loading “Machine Messiah” in the player for the first time as the opener and title track is a very gloomy and mellow track touching upon Doom rather than Thrash Metal. I really like the track, it shows a great sense of melody and the track works perfectly as build-up towards what’s to come. Because “I Am The Enemy” serves a ride worth its name. Thrash Metal at its best and more classic sounding rather than the SEPULTURA groove. It’s fury and aggression and it sounds fantastic. I really like the flow on “Machine Messiah”, it feels like everything fits together perfectly and the band nailed everything perfectly.

The odd “Phantom Self” also came as a bit of a surprise; the prominent melody line was new to me. But perhaps I’ve missed out since I have not being up to date with SEPULTURA lately. I’ve seen them live a couple of times but that’s all. But this too works and it adds another layer to the music, makes it more interesting.

One more thing that struck me with “Machine Messiah” is how good Derrick Green sounds, even though I’m not sure it’s allowed to use 'smooth' as a description of a harsh vocal style as this. But when he first joined SEPULTURA I thought he sounded very dry when compared to Max Cavalera - at least on record. That’s fixed here and he sounds great. The odd rhythm in “Althea” feels more at home when it comes to SPEULTURA. Andreas’ guitar sound is unmistakable and is extra prominent here. It’s heavy enough to tear down walls. It’s actually strange no one has copied him to any larger extent. Or perhaps people have been trying and failed since nothing else I’ve ever heard come close to the brutality Andreas has, it sure is a unique sound at least. Suggestive “Sworn Oath” is a favorite of mine from “Machine Messiah”; the mellow intro sounds awesome and I like the odd selection of notes and harmonies. And then the force of this song when it begins is absolutely fantastic. Again, the keyboards add to the drama and it works fine. I love the extremely heavy verses too and it’s just fabulous when it picks up in intensity just before it moves over to the powerful chorus-line, a mighty fine job by SEPULTURA. “Silent Violence” is another album pick; it’s odd perhaps since this song differs quite much from my other favorite. This is a more straight forward Thrash Metal song, straightforward and raw. The energy in the song is fantastic and everything holds so much power.

SEPULTURA have surely managed to create a very good record with “Machine Messiah” and I’m both surprised and a bit ashamed I haven’t kept track with them these last couple of years. If their earlier releases sounds even half as good as this one does, they are bound to be fantastic.