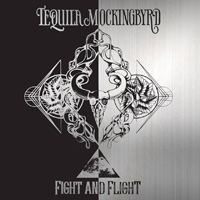 It surely is impressive seeing a hard working band like TEQUILA MOCKINGBYRD; these Aussie lassies have actually moved to England to get their thing going. And it is an impressive collection of rocking tracks they compiled for their “Fight And Flight” debut record. Personally, I prefer a bit heavier music with a bit more distorted guitars, but I can't deny that this one rocks.

Ok, opening “I Smell Rock N Roll” is a rather brutal one and I can't stop thinking about TEQUILA MOCKINGBYRD landsmen AC/DC when listening to this one. It has the same intensity and nerve, even if it doesn't sound like them at all. And I guess it's songs like that one and “Money Tree”, which is also a rather heavy one, that makes this record work for me. The groove is there and the songs are very catchy. Also, there are some interesting twists and turns. I hope this musicality comes naturally and that TEQUILA MOCKINGBYRD are able to deliver the same in concert. Because onstage this would definitely work and normally this type of Hard Rock goes down much better live.

“Catalyst is mellower and, in songs like this one, Estelle Artois reminds me of 4 NON BLONDES’ Linda Perry, a very powerful voice with a great tone. Another favorite from “Fight And Flight” is “So Not Me” which is another heavy one and, in fact, is the most brutal one of the album, it also holds both fantastic dynamics and a great vocal line. I like it when Estelle goes up and screams a bit. Also, heavy and Bluesy “This Ain’t Dead” goes down really well. It shows that the band is versatile and masters many different styles. To keep a track like this one interesting and intense on the record shows real skills. The record also features THE RAMONES’ classic “Somebody Put Something In My Drink” and I guess this sets quite a good label on what style we're talking about when it comes to TEQUILA MOCKINGBYRD. But it's definitely cleaner and more together than THE RAMONES - but we're still talk about Hard Rock with Punk influences, so I'm not sure I'm too fond of this dressed up version of the song. Performance-wise, it is perfection as the rest of the album. But sometimes less is more, it's a good version and not just a copy but the rawness of the original is kind of lost.

Last one out, “Good Time” is another fine tune, catchy and a good closer of the album. It would be wrong to say that this album is nothing but a good one, it's actually very impressive when it comes to performance and musicality and I do like it even if it's slightly outside of my style of music. That it is the first release from TEQUILA MOCKINGBYRD makes it even more remarkable and I really hope that I get the chance to see them live, so I can then continue to say that this is good music period and not good for girls.