Need - Hegaiamas: A Song For Freedom 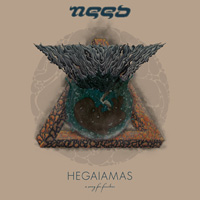 My mind was already set that I would like the new NEED LP even before laying [sic] ears on “Hegaiamas: A Song For Freedom”, simply because their previous two albums have already paved the way. This is the type of Progressive Metal I love, contrary to my general mistrust to this, most of the times, too-complicated genre for my low musical IQ. Yeah, I cannot deal with all the showing-off and over-complicated song structures where it is difficult to distinguish the beginning from the end. However, I was not prepared that these Greeks would have created a better album than the already amazing “Orvam - A Song For Home”, released almost three years ago.

This is a concept album and, simply judging by the title, it is related to freedom which has become a fragile subject nowadays with the boundaries around one’s personal space being blurred by the - ironically - measures to keep him free... The story has to be in a Sci-Fi environment, so expect the music to be occasionally trip-py with lots of effects and amazing production, bringing everything together in a solid piece of fine Progressive Metal. It just takes a couple of seconds into the intro-like “Rememory” to understand that a trip is about to begin meaning that you will be listening to the entire album in one take without even realizing it. Sure, the TOOL references in the pounding rhythm section were a bit of a turn-off (I guess too modern for my ears) but soon enough the song turns into the NEED mode I am so familiar with, from the band’s previous studio doings. The main riff is absolutely fantastic and the same goes for Jon V.’s vocals which to my delight have lots in common with Tom Englund’s (of the EVERGREY fame) unique articulation (the “I can feel it haunting me” line was the first solid piece of evidence for this). The song itself is a beautiful mix of melody and heaviness and it is amazing how the keyboards bleed in with Hammond and modern-sounding lines. As I said, “Rememory” will get you hooked and capture your attention in a movie-watching way as you try to see how the lyrics work with the music to tell the story. “Alltribe” enters in a mellow way with keyboards on the driver’s seat and with interweaving bass and guitar lines. The riff slowly creeps and this song flourishes into a killer Progressive Metal / Rock piece with awesome vocal and keyboard melodies, maintaining the Sci-Fi atmosphere in an almost AYREON way (but a bit darker, I think). And when you think that those two songs have all the styles in NEED’s musical ID, “Therianthrope” enters with the type of heaviness that will definitely remind you of NEVERMORE’s “Dead Heart In A Dead World” era. Yeah, the way Jon V. attacks the aggressive vocal lines reminds of Warrel Dane’s style but this only applies during the heavier breaks because the Greek singer have more singing faces here. In fact, somewhere after the slow break in the center of the song where the intensity picks up, the ex-KAMELOT singer Roy Khan came to mind and this is said in the best possible way.

Even though I love this album from start to finish, if you’d twist my arm then I would tell you that “Riverthane” is my absolute pick; this riff-based tune smells NEVERMORE from miles away but with NEED’s Progressive style shining through, especially during the catchy chorus (only the good Progressive Metal can be catchy) with the yet-again fantastic Hammond-sounding keyboards. And man, that riff will get stuck with you from the first listening...

There is nothing not to like among the seven-song tracklist which clocks one hour and four minutes. Still, the listening goes down extremely smooth and after lots of album-spins I have to admit that the twenty two minutes of “Hegaiamas” are simply captivating. The space-y intro does not prepare you for rollercoaster which is about to carry you through the song’s time duration. The guitar riff has a Greek traditional music backbone in it and the way it builds the main groove is to-die-for.

Sometimes putting together a bunch of words to describe what you have just experienced after listening to an album is so inadequate that the danger of mispresenting the work hidden behind the making of it is almost certain. I mean, I have barely scratched the surface of “Hegaiamas: A Song For Freedom” and, in fact, I left the heavy “Tilikum” with the amazing female backing vocals and the mind-tripping­ interlude “I.O.T.A.” with the spoken parts uncommented. By the way, Arthur C. Clarke would love what the female voice is describing here. This is not an album to be listened lightly because the multiple layers consisting the music just have to be discovered, and in order to do this, one needs to spend way more than the nowadays’ music-listening average time - are you up for the challenge?

Need - Orvam - A Song For Home