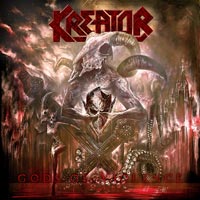 To me, German all-time thrashers KREATOR is one of those bands who not only manage(d) to withstand the test of time with flying colors (we are talking about a veteran band with more than three decades of ‘active’ discography), but their works have always something innovative, even when they were not fully approved by their fan-base (and I’ll throw my beloved “Endorama” as an example). You see, the restless and creative mind of guitar-Master Mille Petrozza does not like to stand on the band’s ‘tested-to-pass’ Thrash recipe, and instead searches for new territories for KREATOR’s music. However, listening to the first tunes of their fourteenth studio offering, “Gods Of Violence” (yeah, there was lots of excitement involved too), I couldn’t believe what the Germans created this time, and let me explain to you why.

The instrumental 1-minute intro “Apocalypticon” lifts the curtain with a rather pompous and glorious way creating the solid foundations for an aggressive guitar-based soundscape where “Gods Of Violence” takes place. Clearly inspired by the nowadays global unrest and how society is changing face towards diversity and tolerance, “World War Now” explodes with a rampant thrashing fury, backed up by Mille’s natural vocals (yeah, I love his less aggressive-type of singing where he still sounds pissed off while letting me understand every word he is spitting). The true winner here (and throughout the album) is the inspired guitar-work where shredding and melodic moments are balanced with an almost Scandi-touch (probably we have to blame Sami Yli-Sirniö’s involvement? Or is it the magic ‘touch’ of Jens Borgen responsible? Either way, the result is equally kickass), and breathes a fresh air of renewal, defining at the same time how KREATOR sound anno 2017. This inspired guitar-work is shines in the mid-tempo “Satan Is Real” where the track’s hook-iness mixed with the impressive guitar skills make this song to stick in your head from the first listening.

For those who love KREATOR for their finest, raw Thrash, “Totalitarian Terror” will speak straight to their hearts, with Ventor’s ruthless drumming, Mille’s and Sami’s merciless guitars and offer an extreme Speedy track inspired from the old days – just awesome! “Big deal!”, some of you may ironically mumble, but wait till you hear the self-titled track; “Pure-fuckin’-awesomeness”, I’ll respond to your grin-y faces – Master Mille truly reinvents the Thrash wheel riff after riff and I am sure you’ll feel the hair on the back of your neck to stand up with the “we shall kill” chorus lyric line. And that’s not all; “Army Of Storms” carries a thrashing breeze straight from the “Violent Revolution” era, “Hail To The Hords” and “Side By Side” bring forward a unique anthemic character, while the closing “Death Becomes My Light” is a guitar-feast of its own, offering so many great riffs, solos and different singing styles over the course of its 7+ minutes, showcasing where KREATOR truly stand nowadays.

Haters will always gonna hate, and spiteful mouths always gonna find something bad to say, but to me, things are simple; an artist is free to express himself through his music, whether we like or not. So, open up your ears to the music and close them towards any other direction; KREATOR are back with a very impressive and modern-sounding album, worthy of their massive back-catalogue, and “Gods Of Violence” is the palpable proof why this band is still alive and kicking. Highly recommended.