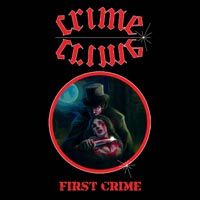 Two things drew my attention towards CRIME’s EP “First Crime”; it will get the cassette tape treatment (yeah, those things are still out there) and the band’s point of origin. You see, bands from South America have the tendency to play old-school Metal and be extremely good, no matter the age of the lineup. So, to my mind, those two elements were more than enough to see what CRIME have in store, even though I already knew the outcome of this encounter...

Keep in mind that I didn’t know the band’s musical style before the listenings, so the long intro of the EP opener “Highway Robbery” kind of muddied the waters. The strange sounding keyboard-based intro with the spoken words describing a crime will send shivers down your spine, so you’ll start thinking about Doom or even Funeral Doom... Well, the snare drum roll and the fast guitar solo will soon enough change this, and scream 'Thrash' in all its glory. And to make things even more tempting, the song has a MOTÖRHEAD-type Rock ‘n’ Roll attitude which, combined with the almost growling singing, makes the adrenaline-pumped Thrash (marginally Speed Metal) of this duo from Chile. The absolutely fantastic guitar-based break with the grunt that brings back the neck breaking Thrash-ness are enough to feed your hunger for well-played and delivered old-school sound. With “Give Your Life To The Ruin”, CRIME widened a bit their sound with addition keyboard and electronic sounds which at first come a bit strange but they do fit with the overall atmosphere. By the way, I think hear some MANILLA ROAD in the guitar distortion during the solo and that’s an absolutely plus in my world. And then, there is the galloping / headbanging part which tops everything off and makes you wonder how CRIME will sound in a proper release since this is branded as a demo / EP. This fine EP closes with “We Shall Destroy” which tries to fake its way in with some movie-like sounds before storming in with the fast snare drum action and the MIDNIGHT-esque in-your-face attitude (those screams are awesome). The music lives up to the song’s title because I don’t think anyone out there would expect to hear a ballad titled “We Shall Destroy”, right? And yes, there is more MOTÖRHEAD during the end...

“First Crime” is a killer three-song EP and sheds the right amount of light to what CRIME are up and about when it comes to their Metal intentions. Sure, the production is not pristine, but to me, this is another plus because it captures the band’s energy and serves the purpose of being old-school. Yeah, this does not sound like old-school, it is old school.

Josefus @ The Hideout, Chicago (US)