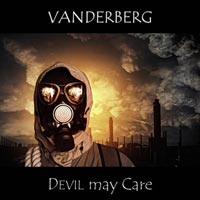 I never really cleared out if Marc Vanderberg is doing all instruments himself or if he has a band backing him up. He’s been gathering a bunch of prominent musicians for his first full length album “Devil May Care” though and that’s what caught my interest. I really liked what Göran Edman did with Yngwie Malmsteen and basically everything else he’s been doing sounds good too.

Plus, the VANDERBERG debut album holds a fine collection of melodic Hard Rock / Heavy Metal tracks. This German guitarist and songwriter is surely talented. The album is very well written and the musical performance is fantastic. Marc himself sings very well too but the different vocalists on the album also bring in variations. The Göran Edman track, also title track, “Devil May Care” is one of my favorites; the depth and dynamics in his voice go very well with the classic-sounding track, touching upon '90s RAINBOW or DEEP PURPLE. Of course, the ballad “Infinite Love” goes down very well too - again, classic sounding and I think it could easily have been part of the MTV generation super-hits or the “Power Ballads” records released a couple of decades ago.

Even if the rest of the vocalists aren’t as known to me as Göran, they’re of equal quality. “Key To Your Heart” features Paulo Cuevas and he does a fantastic job and although his character is a little lighter as compared to the Swedes’ it perfectly fits this snappy track. For some reason, the PRAYING MANTIS track “The Day The Sun Turned Cold” comes to mind listening to this, and I guess, even if it’s no rip-off, style-wise VANDERBERG comes rather close to the late '90s PRAYING MANTIS sound. “Storm, Thunder And Lightning” is a little more mellow but Paulo’s voice works just as fine here. The mighty fine guitar-work behind the vocal lines dominate the track with the short licks and melodies creating a very good dynamic sound something that keeps the else quite simple track interesting throughout its 3min 17secs.

Boban Vasileski has yet another character in his voice and also the nature of the tracks featuring his voice has a bit different nature than the rest, especially “Pray” which almost sounds industrial. And the verses of “Crash´n´Burn” touch upon the same thing. The choruses are of the same melodic Hard Rock quality signifying the majority of the “Devil May Care” album. “Spirit Of The Dragon” deviates from the rest of the Boban-tracks. This time we’re talking about a neo-classical guitar ecstasy; the up-tempo riff sounds fantastic. Boban’s voice is not as melodic as the others but it works fine here, the rawer tone makes the else rather light track much heavier.

I’m actually very impressed with VANDERBERG’s “Devil May Care” album; on occasion it’s a bit too German-perfect but it still rocks, and the variation between the songs is very good, it all sounds amazing. The major problem is that I want to be able to see music live and then, these one man projects / bands fail. It’s so easy to record and release music these days, sending files across the globe back and forth. But again, it’s good that it’s released, since it’s way too good to be kept in a drawer at Marc’s place.

Marc Vanderberg - All Instruments, Vocals (apart from what’s listed below)