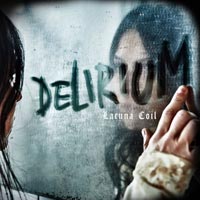 I couldn’t believe I’d give such a big rating on a new LACUNA COIL album; don’t get me wrong, I love the Italian darksters and I find their sound really unique and distinct, but their latest releases weren’t really my cup of tea, especially as compared to their early days material, so the so-discussed-over-the-internet “Delirium” saw my jaw drop, mainly because it’s such a tight-written and (modern) Metal-oriented album. But let’s take first things first...

Yeah, with a quick online search you’ll discover that LACUNA COIL should quit and stop making music and all this comes from some metalheads (a minority) who think they know better (huh!), so my response to them is “pfff, if you don’t like it, skip it and go to the next band of your download play-list”. For the rest who think that historic bands like LACUNA COIL do their best and still exist (I guess there’s no need to remind you that these guys have been producing music since 1998), I just need to urge you to listen to “Delirium” and form an unbiased opinion by yourselves, because it’s such a strong album, and on top of that, it deals with sensitive issues like insanity and asylum-treating, and really I missed having albums with an opinion these days. So yes, Cristina and the boys did dig deep in their souls / minds and came up with a really fitting concept to the KORN / SLIPKNOT-type of Metal they serve anno 2016. From the first tunes of the album opener “The House Of Shame”, you’ll get that ‘jumpdafuckup’ style of modern Metal and since it’s executed so well, it doesn’t feel pretentious and, most importantly, fits the overall theme and the band’s modern image. Andrea’s explosive and angry vocals are the perfect partner in crime to Cristina’s soft and angelic part, with the atmospheric keyboards setting a really nice and catchy cinematic feeling - so, if you got the Resident Evil-type of thing going on, don’t worry, because you’re not the only one(s). “Broken Things” continues under the same Metalcore veil, while the title track is stepping on the classic LACUNA COIL territories. Yeah, it gets dark and somewhat creepy when Cristina adds a really smooth and elegant touch as she’s handling the backing vocals and I shouldn’t forget to mention the dominant bassline which is to-die-for. I believe the fact that Marco wears multiple hats on “Delirium” is the main reason why the bass is not just sitting on the background and has a more organic role, being also backed up by the crystal clear production which by the way does justice to e-v-e-r-y-t-h-i-n-g happening here. Yeah, the band’s decision to let him take over the production reins was a rock solid one.

Tracks like “Blood, Tears, Dust”, “My Demons” and the DISTURBED / “Voices”-laden “Ultima Ratio” will hit the listener hard with their frantic Metalcore character and really present that refreshing image of LACUNA COIL I was talking about earlier, but I found more interesting (that’s why they got stuck inside my stereo for days) the more atmospheric ones, like the tinkling DEPECHE MODE-like “Downfall”, “Claustrophobia” and my personal favorite “Ghost In The Mist”. Here, the main keyboard melody fits like a glove to hand to Cristina’s outstanding performance - you just have to experience this one live in order to understand what I mean here (if you haven’t already), so I’ll leave the facts to speak louder by themselves.

Cleverly balancing Metalcore and Gothic / Dark Metal, “Delirium” has put LACUNA COIL back on the Metal map. I believe this is an album that is gonna please many of the band’s early fans but also re-introduce them to bigger, -Core-driven markets (like in the US) due to its aggressive character and its dynamic setup, so for me, the band made the right decision and it’s evident in every single track. Well done, guys and gal!

Epica @ The Forge, Joliet (US)