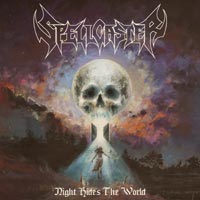 I really like when bands use part of their moniker in the album title, just because it shows the members’ ability to play with words while incorporating some of their main ingredients on their discography, leaving behind a listening mark that is impossible to ignore. This is exactly the case with Portland’s metallers SPELLCASTER who besides their brilliant capability to bring ‘80s British Metal into the modern era, mixing the overall old-school feeling with some real catchy, refreshing riffage and shredding aggression, also make obvious their obsession with the ‘Spell’ word that, besides the band’s name, already appears on their first two albums, 2011’s “Under The Spell” and 2014’s “Spellcaster”. Anno 2016, the Oregon-based five-piece returns in discography with their third full length effort that this time doesn’t include the word or any derivative of ‘Spell’ into the title anymore, making things quite intriguing, so let’s see what Tyler Loney and the rest of the boys have in store...

Once again the plat du jour remains upbeat traditional Heavy Metal where the twin guitars are nicely balanced between harmony and uplifting grooves and the bass has a spicing-things-up role, topped off by Tyler’s clean melodic singing that seems like it comes straight from some ‘80s act on its baby-steps, before albums like “The Dark” or “Rage For Order” saw the light of day (wink, wink...). Yes, it’s not overselling to mention both METAL CHURCH and QUEENSRŸCHE as SPELLCASTER’s source of inspiration throughout the eight tracks of “Night Hides The World”, and that’s only a good thing in my book. “Aria” lifts the curtain having both feet on the ‘Metal’ pedal, while its kick-ass melodic tune, being pushed to the spotlight by the twin guitar attack from Cory Boyd and Bryce VanHoosen, is the perfect appetizer for what’s next. And that’s more old-school Metal with the self-titled track of the album coloring the overall atmosphere with additional melancholic yet powerful colors. Tyler’s doing a great job behind the mic, proving that he has the perfect set of pipes for the job, and I’ll give kudos to the production for highlighting everyone and everything with a crystal clear sound without letting them stepping on each other’s foot, maximizing the listener’s pleasure.

The great thing with SPELLCASTER is that what you’re listening to their albums, you’ll get from the stage too, and the ultimate proof for this is the killer duo “Betrayal” / “I Live Again” that the Portlanders included in their latest setlists, supporting Canada’s STRIKER, two months ago. Despite the fact that these two tracks have a different approach of how old-school Speed Metal should sound like (the former is the perfect early METAL CHURCH-meets-QUEENSRŸCHE type of track, and the latter has all the Speed-y cylinders firing with a vein-popping refrain), it feels like you’re having SPELLCASTER in the middle of your living-room, sweating their socks off, making it impossible not to participate in the having-Metal-fun mood. The same goes for “The Accuser” and “The Moon Doors” and really there is no place for fillers here; every track is cut from the same old-school Metal cloth and is strong / good enough to make you fist-pump / head-bang like there is no tomorrow.

I already know that many of you will think that SPELLCASTER is one more wannabe old-schooler out there, and “Night Hides The World” is one more same-ol’, same-ol’ LP but I’ll correct you by saying that these guys have their own special way to approach the so-called NWOBHM / ‘80s Speed Metal (that has become such a big trend these days). On top of that, they have the right attitude to support their music onstage and that’s a huge plus for me. Hey, you can see it for yourselves, if you decide to attend one of their upcoming shows with HOLY GRAIL, starting July 12... Totally worth it!

Spellcaster - Under the Spell