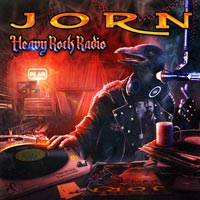 Sure, one can consider albums full of covers as a waste of the listener’s time (and money) or as an easy way for the artist to cash in. There is some truth to this, especially when the covers are on ultra-played songs, adding absolutely nothing to the originals. On the other hand, if the selection is based on the musician’s wants or likes, then there is a fair chance of putting together a really enjoyable collection. “Heavy Rock Radio” belongs to the latter category and honestly, I would not expect something less from Jorn who I believe is (still) an underrated singer. Trust me, when at least some of the titles do not immediately remind you of a song, then something good is coming.

I am talking about songs that you recognize as a melody or even remember some chorus lines but have absolutely no idea who made the original. Ok, “I Know There's Something Going On” did not ring any memory bells and I had to search for the original to see what Jorn and Trond did on the song sung by Frida who has been in Swedes ABBA. And this is exactly what I am talking about taking strange or alien to your regular listening list and convert them into something different. Sure, it’s not that the song became unrecognizable but has a different energy and - of course - is heavier due to the guitars (while the drums kind of follow Phil Collins beat). Like I said, Jorn is an underrated singer and if you still doubt this, then you should definitely check what he is doing in this 12-track album. I mean, singing a Kate Bush song (“Running Up That Hill”) and make it sound like one of his songs, is just awesome. Still, the song that made me appreciate even more his singing power is “Killer Queen”, originally released by QUEEN. Sure, this is an easy song with a pretty melody, so what’s the deal, you may be thinking. Yeah, you may be right at a certain extent but you’re most probably forgetting how unique Freddie Mercury in terms of singing expression, pronunciation and his amazing way of painting the lyrics with his voice. So yes, this is probably the best cover on the album, despite the fact that the most memorable “You're The Voice”, “Don't Stop Believing” and of course “Hotel California” may earn the most play-time during the first album spins, simply because the vocal lines are amazing as they are on the originals. I deliberately left out “Rainbow In The Dark” and “Die Young” since Jorn deserves an additional citation for paying homage to Dio with most probably the best voice to do so. Especially, “Die Young” sends shivers down my spine reminding at the same time the huge gap Dio’s passing has left in this scene. Last but not least stands “The Final Frontier” and I have no problem saying that this became better than the original. Although this is not the time or the place I will go on and say that this is most out-of-place song MAIDEN have put out and Jorn did give the right Hard Rock atmosphere it deserves.

While you (hopefully) reading these lines, keep in mind that I have a sweet tooth for covers and also that I am a fan of Jorn, so I am definitely biased. However, the song selection was not safe because you won’t only find the classic picks. On top of that, the guitars have Metal-ized the foreign to our ears songs, so you’ll be getting a killer tracklist for your summer nights.