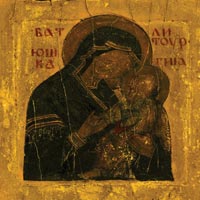 One of the few things (it may be the only one) I like with the so-called social media is the exposure to music that otherwise would have slipped through the cracks. You see, the number of new albums is ridiculously high. so the probability of missing good stuff flirts with becoming a certainty and that would be a great loss. So yes, getting random posts with sometimes interesting music suggestions is mostly welcomed. This is how I came across Poland’s BATUSHKA and their debut release “Litourgiya” that got me hooked right away.

BATUSHKA is covered with a veil of mystery since there is no information about the musicians in the lineup aside from the gossip that they come from well-known bands. Of course, this adds a certain hype which to be honest I hate but at the same time I understand that it draws some attention towards the music and not to some rich CVs. Just by looking at the album’s cover artwork one would expect primitive Black Metal with lots of blasphemy and would not have been totally mistaken aside from the last part since the lyrics are written most probably in the Polish language. But I don’t think all the growling and screaming talk about flowers, rainbows or unicorns...

“Ектения I: Очищение” slowly lifts the curtain only to let the darkness fill the area with some ritualistic sounds, almost Gregorian-type singing and thick guitars that welcome the Black Metal heaviness in all its grandeur. Still, this is not the typical Black Metal with a muddy production and screams that cover all the audible frequencies. Here, there are multiple layers interwoven with each other creating an impressive song-structure with the screams changing places with the aforementioned Gregorian-esque singing. There is a golden balance maintained throughout the song with the scales being equally pushed towards the aggressive and the melodic/ritualistic side. The song is almost connected to the next one so it sounds like the most logical continuation. Listening with headphones is the only way to pierce through the veil of the thick sound and really digest everything BATUSHKA are doing in this faster one. The riff-driven break creates a wonderful antithesis before bringing forth some BEHEMOTH influences. These guys know very well how to create an atmosphere with all these bell sounds and the difficult to identify percussion before letting the Black Metal heaviness to do the rest. Again, the bizarre but awesome mix of melody and aggression grants “Ектения III: Премудрость” the title of the album’s immediate hit. Yeah, even if I don’t understand a word, I try each and every time to join singing the chorus. By the way, the down-tuned guitars standing one step behind the Black Metal-characteristic monotonous riff are fantastic.

The spoken lyrics part and the bass lines of “Ектения VI: Уповане” are amazing and prove that sometimes using other than the English language can be super beneficial to the music. Yeah, there are some pronunciations or languages out there that are able to send shivers down your spine painting pictures with the darkest shades of black (I know this is a totally unconventional selection of words) if they’re properly used like it happens here.

Even though I used quite a few times the term ‘Black Metal’ to describe “Litourgiya”, it would be a huge loss if you missed BATUSHKA’s impressive debut just because you are not a diehard fan of this genre. The album has many faces and a huge depth that’s waiting to be explored, so dim the lights, put your headphones and embrace the darkness as it slips through the speakers... Are you strong enough?