The Skull - The Skull 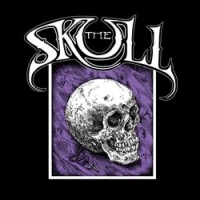 When a band is on a roll, only good things can happen and this is exactly what is going on with THE SKULL who by the way are prepping their gear for a nice European run. Aside from the live shows where the band is always sharpening its teeth and getting better and better, THE SKULL put out an impressive debut LP, full of inspiration and energy to get the Doom Metal word out to the world. On top of this, and to make the deal of the Euro tour even sweeter, THE SKULL got in the studio and recorded a new song for the EP in question that also features two TROUBLE covers and two live recordings. Can you think a better way to water the appetite of our Euro friends?

In all honesty, this was not my first time listening to “The Longing” because THE SKULL had already this one on their set when they opened the show for SLEEP last month, although no fair judgement can be made when you’re headbanging hard as the music is blasting from huge PAs. However, this song sounded equally powerful and absolutely fresh meaning that this lineup is fueled and inspired as it feeds from the positive energy and the will to produce new music. I love how the song starts with a solo before marking its Doom Metal territory with a killer riff and a bone crushing rhythm (pay attention to what the bass guitar is doing). As expected, Eric Wagner is nailing the vocals but I think there is something new in his singing with an almost Blues vibe in his lines or something else that I cannot identify. Maybe what I am trying to say is that there is more melody in his singing that also feels more expressional. Even though Doom Metal is still on the focus, there is a mood-lifting atmosphere that works like a charm. Speaking about his performance wait until you hear what Eric has to say in the bone-chilling TROUBLE cover “The Skull”. Damn, it’s impossible for one to surpass the version sung by the original voice, simply because the first listen is where you get all the feelings. Yeah, it is not about who is the best singer but with whom you got the first goosebumps when hearing a song. “New Generation” comes from the band’s debut LP and although it sounds a killer with the bass lines shining in the mix I’d prefer to have more live recordings because this EP works something like a showcase for the band’s upcoming touring venture in Europe. Yeah, check how “Assassin” and the amazing “Til The Sun Turns Black” work despite the fact that these recordings did not capture the massive sound coming from the three guitars present at that show.

There is absolutely nothing to add here other than repeat that this EP is the perfect audio representation of the situation of THE SKULL and how every piece of the music making and of the live performing has fallen into place. I am sure the band will return from Europe with the hunger to put another great LP, but first things first; check THE SKULL in any given chance because crossing the big pond is not something you do every day.

Corrosion Of Conformity @ The Forge, Joliet (US)

The Skull @ Reggies, Chicago (US)

The Skull @ BrauerHouse, Lombard (US)