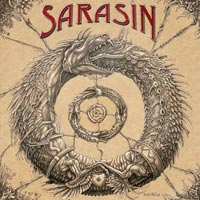 At first, I was attracted to SARASIN’s self-titled album via its cover artwork with the snake or dragon-like creature which is hard to determine if it is Gothic, Viking, Fantasy or Horror movie inspired. It is also equally hard to label SARASIN’s music. Or, actually, it’s easy to mention a lot of classic bands as references but it’s not like they sound as one in particular. We are talking about Hard Rock / Heavy Metal in a Classic form but... it’s Dark and Heavy music with Stoner influences but SARASIN don’t really fit any label in that direction either. This is what I find very appealing with SARASIN and the music they push out through this album.

I think that the album opener “The Hammer”, which has been released as a video, is not all that representative for the rest of the tracklist. It is a very good and catchy track with a fantastic groove which is as much Stoner as it gets. What comes after is what got me hooked from start. “Enemy Within” is much more melodic with an awesome melancholic vibe throughout. But the real thing starts with “In Our Image”; the frustration and desperation in Mike Wilson’s voice are fantastic and the galloping riff that builds the song is so brutal. In one way, it feels out of sync but the drive it has is absolutely a killer. And then, the open chords and tom-rhythm in the chorus-line, which also seem out of sync, at least during the first few album spins but when it falls into place it becomes pure genius. “Now” is more melodic and just by looking at the riff it could have been RAINBOW or DEEP PURPLE but the feel in it is very different from these bands; it is way too mellow to be called modern even if the song-structure and chorus-line have a rather contemporary edge to it all.

One song that hit me immediately was “Sinkhole”; again there’s this off feeling in the initial riff and Mike shows off his most mellow side. Then during the chorus he gives it all instead and the tone in his voice in the high pitched lines reaches the frequencies of Rob Lowe from his SOLITUDE AETURNUS days. It’s a song I keep playing over and over again; Heavy and melodic the one gives me goose-bumps all over. One more track that became one of my first favorites of the album is “Forevermore”; again, the rather classic riff in the verse and another fantastic melody, then an edgy bridge before the song goes back to its slow beat again. To have a chorus-line in half-tempo to go with a faster verse always work, especially when it’s carried by a very intriguing guitar riff and a strong vocal line.

It’s actually strange how a record can touch the senses. I mean (with the risk of insulting someone here), the production of SARASIN’s first full length album is good but it’s not of the same class with the big bands or something out of Backstage or Roxx Studios. Just isolating the guitar sound, especially the one in the foreground sounds like it’s processed through an '80s zoom effect. But together with the rest, it works perfectly. And the whole thing was instantly etched in my mind and I couldn’t put it down. It crawled under my skin and there is nothing that could really compare to it. I actually prefer a more organic production, the modern ones make the music lose its soul and that’s one thing present on SARASIN’s album.

So, for sure, all fans of Heavy Metal should check this one out. This record will definitely end up at the top of this year’s list of favorite albums and I can’t really see how anyone should not like it.