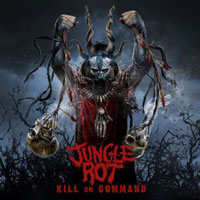 The Death Metal quartet from Wisconsin has returned with “Kill On Command”, their 8th studio album since their formation in 1994 (they also have four EPs and one Live DVD). The band, during the 17-year career has seen many changes, both in members and in labels. This album is released under Victory Records, after leaving Napalm Records where “What Horrors Await” was released.

If you’re not familiar with the band, you realize, after the first spin, that they don’t try to be technical at all; it’s just plain Death Metal with hammering riffs and pounding drums. The album begins with the powerful “In Their Finest Hour”, which is full of energy, fast riffs and solos and pummeling drums. Next are “Bloodties” and “Rise Up And Revolt” which pick up exactly where the first song left off: a great way for an album to begin! The title track calms things a little bit, being mid-tempo, but not lacking of energy. This ‘calm’ intermission lasts only for three and a half minutes because the three next songs put things back on the thrash-y track: headbang till you bleed with “Demoralized”, “Push Comes To Shove” and “I Predict A Riot”. I can imagine from now what will happen in the clubs, when these songs will be performed live! The last three songs deviate from the death/ thrash path and follow a more Death/ Deathcore one, but that doesn’t mean that they are not killer songs like all the previous ones.

Seventeen years is a lot of time and it’s more than enough to gather experiences that will help you releasing great albums and JUNGLE ROT has done exactly that: has turned into an experienced band, armed with successful recipes. “Kill On Command” will not disappoint anyone that will buy it, either band’s fans or not. The energy, the passion and the well-performed compositions will surely satisfy any Death/ Thrash metalhead out there.