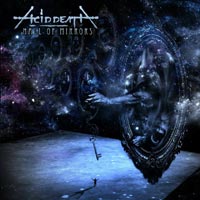 For (still) unknown reasons to me, the Greek Metal scene behaves like the mythological god Kronos and keeps eating her children, so the number of bands passing the country’s borders is small and not all indicative of the high quality of Metal being created there. And that’s a shame, because there are bands there that could have a better fighting chance, if their passport had a different country of origin. I guess one of those bands is ACID DEATH which have been around since the late '80s, although a ten-year hiatus has already been documented. Three years after the release of the comeback “Eidolon”, ACID DEATH are back with “Hall Of Mirrors” that I think is quite a few steps ahead of its predecessor.

The main thing that caught my attention as soon as “Mental Slime” had entered was the closer to Thrash sound as compared with “Eidolon” which - by the way - had a rather ‘plastic’ production. This album has an organic sound and such a balanced mix that makes total justice to the always present Progressive finishing touch. By listening carefully, one can spot the Thrash virtues of the good old German school with fast riffs, snare drum-driven rhythm section and the perfect high-hat action (I have a sweet tooth for this). Yeah, pay close attention to how the music is structured during the guitar solo in “Truth Revealed” and how the main riff keeps the sound current and hence kind of modern. If you are a good Metal history scholar, then using the name of CORONER as a reference to describe ACID DEATH could be more than enough to give you a good idea what’s going on in “Hall Of Mirrors”. Still, the Greeks have more to offer than the technical Thrash tag may imply, and the seven and a half minutes of “Life And Death” are the enough to showcase this. The clever mix of growling and clean vocals add depth to the song which is perfectly balanced technical Thrash, meaning that one can make sense of the song structure without being lost by the multiple tempo changes and countless guitar layers. The solid rhythm section, the awesome collection of riffs and the vocals mix have a NEVERMORE quality that would be a shame to go unnoticed. Still, the most melodic guitar solo carries ACID DEATH’s original identity, something that has to be the result of the zymosis that took place after all these years. The title track spice things up with electronic samples, adding more depth in the atmospheric aspect of the album, while the deeper growling pushes the scales towards the kind of Death Metal Chuck Schuldiner envisioned and materialized with the post “Spiritual Healing” LPs.

It’s a good idea to spend some listening time using headphones because there is quite a lot going on as it happens in the killer “Taste Of The Erratic” where the female guest singing by Iliana Tsakiraki expands even more ACID DEATH’s musical spectrum. And yeah, the bass driven part sounds great as it leads towards the climaxing ending of this thick composition. Don’t be scared by the Progressive side of this album because the tracklist contains a couple of good headbangers like the groovy “Truth Revealed”, “Planes Of The Eternal Planes” with great riffs and double bass drum sound or the modern “Supreme Act Of Heroism”.

This album is better than “Eidolon” and I think it’s the logical step in the evolution of ACID DEATH during the band's second era which I hope will grant them a wider recognition. Even if I had tried hard, I wouldn’t be able to find something bad to say about “Hall Of Mirrors”, so I hope there will be plans to put this on vinyl. This is absolutely recommended.