"Nobody lives, lives forever, Nobody lasts that long", - Nobody Lives Forever, by HALLOWS EVE 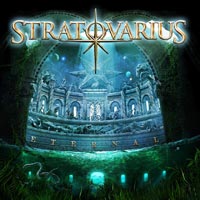 Despite the rough and kind of strange period of time STRATOVARIUS had to endure some years ago, they have been a consistent Power Metal band with high quality and mood lifting melodies. Sure, you can blame them for producing ‘predictable’ music but this won’t change the fact that they have contributed in forging this specific type of Power Metal with most characteristic song structures. “Eternal” is the title of the Finns’ sixteenth album and although I was prepared for something inside the well-known STRATOVARIUS boundaries, I was extremely surprised...

...because the album sounds fresh, inspired and has a ‘live’ character that I missed in previous releases. Like I said, STRATOVARIUS underwent some significant lineup changes and I think were close to call it a day, but fortunately 2009's “Polaris” proved that there was more gas in this band’s tank. Having that LP as a starting point, STRATOVARIUS worked hard and I think “Eternal” is here to prove that the Power Metal balance has been restored. Yeah, the keyboard intro of “My Eternal Dream”, the tight guitar rhythm section and, on top of everything, Timo’s characteristic singing, scream STRATOVARIUS from miles way. "Nothing out of the ordinary", you may think but notice how ‘natural’ the LP sounds and then embrace the freshness of this composition to really understand why I consider “Eternal” as the best release of the second STRATOVARIUS era. Yeah, the keyboards and the lead guitars take turns on the driver’s seat and then explode during the faster reprise of the chorus as we get closer to the end of the song. I can definitely see this as the setlist opener with many fists in the air and lots of singing along. Up-tempo and spirit-lifting songs like the amazing riff-driven “Rise Above It”, the epic “Feeding The Fire” (there is a distinct “Destiny” flavor here) and the groovy headbanger “Man In The Mirror” (the keyboard leads have a killer old-school vibe in them) are immediate hits and carry the STRATOVARIUS torch with bride.

A STRATOVARIUS album cannot exist without a power ballad, so here, there is “Fire In Your Eyes” that starts with piano-sounding keyboards and Timo’s crystal clear singing with a moody atmosphere and then the guitars enter to add an epic layer letting the vocal melodies shine through. This is a strong candidate for that part of the setlist where the audience joins Timo into some arena-type co-singing. The epic character of “Eternal” stands on the podium for a little less than twelve minutes of the climaxing and awesome “The Lost Saga”. This one talks about Vikings (this maybe the first time I hear Timo singing lyrics like “I hail the Thunder God”) so expect galloping rhythms, a super-addictive main riff, crushing bass lines and lots of story-telling singing. Following the rather classic keyboards/guitar duel, there is a headbanging snare-driven part that leads to a nice clean guitar-based slow-tempo interlude. The symphonic orchestrations build up the tension again, opening the road for the climaxing and faster ending. I know this is a long one but it would be epic to have it on the upcoming STRATOVARIUS live shows.

In all honesty, before letting the needle drop on “Eternal”, I was thinking that I wouldn’t need lots of album spins to decide whether I like it or not. But in the end, I have been revisiting this LP many times and I have to say that the ten-song tracklist have succeeded to rekindle my interest in STRATOVARIUS whom I was considering as another ‘recycling the same stuff’ band. I’d go as far and state ‘welcome back, STRATOVARIUS’!

“I'm on my own, walking down this road alone
I'll go on, I'll be strong, all I need is my eternal dream”