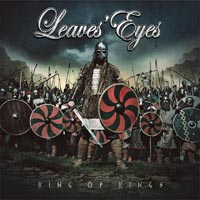 It has been some sort of a second nature for all of us to use (and at times invent) music genres throwing just a couple of words to describe what our ears are listening. You may think this ‘habit’ is ok as it promotes communication simply because metalheads talk the same language but I think there are occasions this goes overboard with bands being placed in categories and being confined in small boxes. So, having these lines as food for thought, you should be ‘careful’ when approaching the new LEAVES’ EYES album, entitled “King Of Kings”. And this is because there is little connection with the band’s previous LP, something that should be expected since this one is a concept album, dealing with Norway’s first king.

I am not trying to say that LEAVES’ EYES have abandoned the Gothic aesthetics that were in abundance in “Symphonies Of The Night” but have dug deeper in their Folk roots and have magnified their Symphonic Metal songwriting to serve the concept like a tailored suit. Allow me to spill the beans right from the start and tell you that the Liv Kristine-fronted band has done an amazing job. You can ‘feel’ the different atmosphere during the two-minute intro that goes Viking all the way with those primitive sounding musical instruments and in the way Liv starts to sing or narrate the story which will soon unfold in front of you. The album’s title track is not a fast one but is still pompous with absolutely fantastic orchestrations that build the perfect musical scenery for Liv’s impressive singing. It’s hard to believe that she is a self-taught singer, especially during the chorus where she steps on soprano territories with clear and powerful performance. Alexander Krull’s growls do not play the ‘beast’ part like in so many cliché Symphonic Metal albums but sit on the driver’s position to build the tension for the next track. “Halvdan The Black” is heavier having the guitars one step forward in the mix, while the orchestrations maintain the movie-soundtrack atmosphere intact. Yeah, this will definitely be a crowd pleaser and a solid headbanger in the upcoming LEAVES’ EYES touring adventures. Ok, I may have gone overboard by saying that the band moved away from the Gothic forms because “The Walking Eye” is a song with such characteristics where once again Liv shines through with her unique singing style and timbre.

Folk Metal steps into the limelight during the fast “Vengeance Venom” where the flute and most probably violin sounds team up with the lead guitar to set a galloping tempo, and I am sure you’ll throw your fist in the air and join Alexander into war-grunting. In “Edge Of Steel” there is one of the two guest appearances in this album; EPICA’s Simone Simmons joins Liv and Alexander in this groovy yet epic song with super-addictive lead riffs. Keep in mind that this one may need more listening time as there are many things happening at the same time, so you need to direct your attention accordingly. The second guest shows up in “Blazing Waters” where the Folk elements paint pictures of Vikings fighting and of body-covered battlefields. This time it’s WARDRUNA’s Lindy Fay Hella to do some singing in this epic headbanger, so I hope this will also make its way to the band’s live setlists.

The beauty of “King Of Kings” is that it’s not better than the previous LEAVES’ EYES LP but different in terms of atmosphere and song-structure. Clearly more work was involved in the making of this record and the result is a killer set of songs with lots of things to absorb. If I am not mistaken, “Swords In Rock” can be characterized as the first LEAVES’ EYES drinking song, but no matter what is the best way to drop the curtain on this killer album.

Leaves' Eyes - Symphonies Of The Night