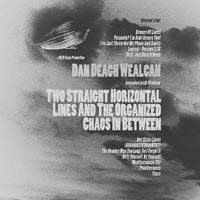 It’s not very often not getting a single thing about an album I’m set to review. My first instinct was just to take DAN DEAGH WEALCAN's “Two Straight Horizontal Lines And The Organized Chaos In Between” out of the stereo but before doing so, I noticed this note on the back of the booklet: "this album is dedicated to those who listened to it from beginning to end... and even those who have tried to do it. Thank you all." All music actually deserves respect but even if I got through this a couple of times, I’m not sure if I’m the fool or I still just don’t get it. Organized chaos, yeah, maybe...

One of my first thoughts listening to this record was STRAPPING YOUNG LAD; Devin Townsend has the ability to create some really chaotic stuff as well and kind of outside of the box songs. But DAN DEAGH WEALCAN doesn’t have the same flow to the music. It took four songs into the album before something that actually felt listenable showed up, the rather mellow “Logical - Version 3.76” that actually carries some really nice melodies, in the new school modern Death Metal kind of way. I also like the melancholy and hollowness of the song. See, something got stuck... Also “Well, Just Burn It Down” kind of touches upon that same style but this one holds those rather odd sounding paths passages.

I really can’t judge if this is good or not. I’m not at all into Electronica kind of music, which this has similarities with, especially taking the drum arrangement in consideration. Of course, occasionally this is just odd and strange, but in other places the rest of the instruments create the rhythm, while the drums whip up some really stressful rhythms over the else rather floating music. The same effect as Electronica music has on me. So, to quote one of the songs on the album (the ending at least): WTF?!

I don’t get it and I don’t like it... Good? Not for me to say. You should at least get it before judging, right?