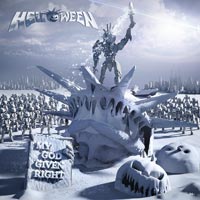 I have no doubts when I say this; HELLOWEEN have been influencing countless bands for almost 30 years in the field of melodic Power Metal. Since the middle of the '80s, they have been releasing excellent Power Metal albums and then supporting them with most successful tours around the world. Their first three albums are Metal masterpieces and had a great impact to the entire Metal scene. Later, the band faced many troubles with the label about the song-rights but everything was smoothed out after joining EMI during the late '80s when they did an impressive tour alongside IRON MAIDEN and POISON. The EMI albums were a disappointment and then Michael Kiske and Ingo Schwichtenberg left the band for different reasons. The band continued with Andi Deris on vocals and Uli Kusch on drums and released a killer series of albums from “Master Of The Rings” until “The Dark Ride”. Later, Roland and Uli parted ways with the band and were replaced by Sascha Gerstner and Dani Löble respectively, and continued releasing very good Power Metal LPs like the blast from the past “Keeper Of The Seven Keys - The Legacy”, the essential and beautiful “Gambling With The Devil” and the latest and modern “Straight Out Of Hell”. On October of 2014, the band returned Tenerife and Mi Sueno Studios to record their 15th album “My God-Given Right”, celebrating their 30th anniversary.

Andi Deris characterized “My God-Given Right” as ‘going back to the roots’ and I agree with this because the album works as a time machine taking the listener from the mid-‘70s, the late ‘80s and the mid-‘90s and then back to the present. The trip starts with “Heroes” and “Battle’s Won” that will warm your neck with the speedy and melodic riffs carrying the trademark HELLOWEEN sound. The album’s title-track is a melodic and lovely track with fast melodic guitars, while “Stay Crazy” is following the same lyrics-path with “Don’t Stop Being Crazy” from the “Rabbit Don’t Come Easy” LP with the difference being that the new song is not a ballad but a melodic and a typical HELLOWEEN song with characteristic double-guitar solos. “Lost In America”, that was also at the “Battle’s Won” single, is a hit-song with catchy melodies and beautiful chorus and I am sure that was written about the band’s successful tour in the US. “Russian Roulette” is a typical melodic Hard Rock of the “Master Of The Rings” while “The Swing Of A Fallen World” goes back to the excellent “The Dark Ride” LP when HELLOWEEN were adding different elements in their music with the result being unbelievable. “Like Everybody Else” is a semi-ballad song with very characteristic vocals and catchy chorus carrying an optimistic aura which is followed by the faster Power Metal dynamite entitled “Creatures In Heaven”. “If God Loves Rock ‘n’ Roll” has a great refrain which adds on the song's total value by being a perfect match to the main melody and I am sure it will remind you the legendary “I Want Out” or maybe of “Final Fortune” from the “Gambling With The Devil” LP. “Living On The Edge” is a Power Metal and speedy song with lovely lyrics and a chorus which points towards the first years of Andi in HELLOWEEN, somewhere between “Master Of The Rings” and “The Time Of The Oath”. “Claws” will surprise the listener lifting the curtain a remarkable solo which is then followed by dynamic and cutting edge riffs and and an epic chorus that will stick to mind from the very beginning.

Usually, HELLOWEEN put in the end of every album the most powerful and faster track; for example, in the previous album there was “The Church Break Down” which was much different from the rest tracks of the album. In this case, they chose to not have a that different track from the rest of the album - this is a somehow similar with the album’s speedy ones, with melodic refrains and mysterious atmosphere. Last but not least, “You, Still Of War” begins smartly with mid tempo heavy riffs, and later Dani speed things up accompaniteed by another fabulous refrain.

HELLOWEEN have offered an album which consists of elements from all over their career, and I bet they did this to celebrate the 30th anniversary. As I said before, the album functions as a time machine through the whole career of these pumpkin-heads. The album's structure is stronger and well-ranked so “My God-Given Right” flows easier as compared to previous releases. Dani Löble showcases once again his bombastic drumming and Sascha Gerstner delivers excellent ideas which are transformed to excellent songs. Andi rocks again in this album; we’re talking about professional and smart performance by a singer who can sing everything. Markus is giving one of his best basslines through the album and makes everything right, something that is very obvious through every pumpkin album. As you already know, the production has been arranged by Charlie Bauerfiend at Mi Sueno Studios in Tenerife, but what you probably don't know (yet) is that Charlie's personal touch is everywhere in the album and surely we can call him the band's sixth member. The artwork will remind you the cover of the “The Day After Tomorrow” movie - I didn’t find anything wrong about that. After a simple good album like “Straight Out Of Hell”, HELLOWEEN strike back with a blast coming from the past but with an identity coming from the future. They send the message that they are the true kings of European Power Metal and no one will take their throne. As they have said before nineteen years, “we are the ones to cover the throne”.