Michael Schenker’s Temple Of Rock - Spirit On A Mission 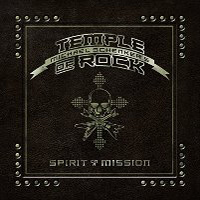 Needless to say, Michael Schenker has been a huge inspiration for countless of Hard Rock and Heavy Metal guitarists from the '80s and onwards. Leaving aside his MSG activities for awhile, Michael now strikes back with his second TEMPLE OF ROCK project, offering a nasty set of songs under the general title “Spirit On A Mission”.

There’s not much to say about this release, indeed (not that I usually write that extra much in my reviews anyway) but “Spirit On A Mission” sees Schenker and Co. delivering the goods at easy with their British Hard ‘n’ Heavy kind of Rock, based of course on the firing guitars work but also on the brilliant - once again - vocals of Doogie White. The rest of the team performs relentlessly too, resulting on a string of songs that shall be a frequent visitor in your audio system. There are various tempos here with mid-pace songs being the main dish while the soloing of Michael is the ‘ace’ again; the man’s like good old wine, dammit...

Didn’t have to write that much, see? “Spirit On A Mission” seems to be in a better shape than its predecessor and that’s not something you should neglect. Michael Schenker is in fine mood and fans of the German axeman will celebrate this new release too, I guess.

Michael Schenker - Blood Of The Sun