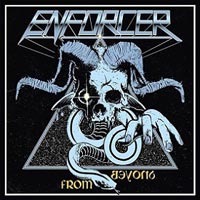 When I started listening to ENFORCER, I considered them to be the next big thing in the traditional Metal business. Be it the furious songwriting/performance or the classic-wanna-be attitude of the Swedish band, from the first notes of their “Into The Night” debut (2008) I can recall I was expecting them to soon sell out venues and small arenas. Now, after seven years and four albums later, I can see I was 50% right...

For everyone familiar with the band in prior, let’s just say the recipe remains the same, so there’s not much different to expect; you can’t go wrong with “From Beyond” if you have been an ENFORCER devotee all these years. If you’re not an aficionado though, let’s firstly say the band from Sweden performs Heavy/Speed Metal with a clear reference to the equivalent part of the NWOBHM phenomenon. The riffs are fast and furious while the soloing sounds relentless; the rhythm section is hard and pounding and you won’t listen to any Euro Power Metal elements. It’s only about Heavy Metal and sweat here and if you consider these words are unknown, you better re-evaluate your relationship with classic Metal music. There’s nothing really wrong with “From Beyond” except from the fact that the band performs in the same vein as in its past albums. And if this fact does bother you, then you should check again with your ears and metallic soul...

“From Beyond” is probably the most mature ENFORCER album to date, counting the fact that it’s been more than 10 years that the band has been active. Else, there’s not much to shock you if you listen to the album’s tracklist. I do not know if this is for better or worse but truth is this outfit performs well at what they are doing; I just think they have managed to climb up to the limit of what they can succeed into. And I do not know what to expect from every other release of theirs from now on. They play good Metal music, they do great gigs in small venues and that’s all for now. And for the future... well, who knows?