The Answer - Raise A Little Hell 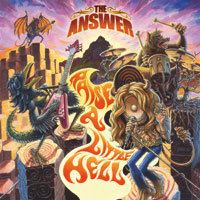 THE ANSWER is a fine example of the impact the success at the early stages can have at a band’s songwriting. I mean, getting so much attention with the first two albums and then getting onboard a huge tour can be quite a heavy load on the musicians’ shoulder. Of course, I am just speculating but I think the Napalm Records debut “New Horizon” was not exactly in the framework of the Irish band. At the same time, such situations can shape a band’s character and in the end it works better for everyone. Yeah, this is what happened with these Irish men, and “Raise A Little Hell” is a solid proof that the Hard Rock balance has been restored.

In this album, THE ANSWER sound more relaxed and (again) confident in their songwriting with “Long Live The Renegades” being the most suitable ambassador for their type of laidback Hard Rock. Yeah, the opening bass lines don’t lie and quickly set up a killer foot-tapping rhythm smoothing the way for Cormac Neeson's most melodic and slightly harsh singing. And to put your mind at ease, the early AC/DC rhythm guitar vibe is still present while the solo will touch your Hard Rock soul and then ask for some whiskey to take the edge off. The relaxed atmosphere of the album steps forth with songs like “Cigarettes & Regret” and the amazing “Strange Kinda' Nothing” with the lovely arpeggios and the moody power ballad-type “Gone Too Long”. Your sweet tooth for vintage Rock with a pinch of '70s psychedelia will find relief with the ZEPPELIN-esque “Aristocrat”, the bass driven “Last Days Of Summer” (this title sounds out of place in the snow covered and frozen Chicago) with the killer fuzzy-type effect on the vocals and the AC/DC groovy tune “I Am What I Am”; no one will be able to resist the back-to-the basics drumming and the nice guitar chord-progression as they lead to the catchy chorus welcoming all the sing-along it can get. Without being a professional sound engineer, I’d bet that there was some analog-equipment involved in the making of this album, so I am really excited to get the vinyl edition and dive deeper to the natural sound and the warm bass lines that get on the driver’s seat on the title track of the album. There is an almost bad-boy attitude of the Blues-type getting flesh and bones via the harmonica/guitar solo (awesome stuff), being a great way to drop the curtain in this fine piece of Hard Rock album.

It is true that I had also lost some of my initial interest in THE ANSWER, thinking that they may have lost their way under or just changed their songwriting style. “Raise A Little Hell” has not only rekindled my interest but enticed my excitement to watch again these Irishmen onstage enjoy the most of their little Hell. Now, we just need some spring weather to get the Hard Rock/Blues mood going...