Wolfpakk - Rise Of The Animal 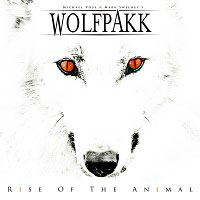 Just by looking at the guest-list, one well-educated metalhead will get waves of shivers down his spine and if you don’t believe me, scroll down and see for yourself. However, when an album features so many guests, it flirts with the term ‘supergroup’, nurturing a high possibility that the music will fail to meet the high expectations. Considering how good the WOLFPAKK debut was, I admit that I didn’t have second thoughts about the quality of “Rise Of The Animal” and let me tell you right away that I wasn’t wrong...

...because the album turned out to be amazing without a single weak song. Yeah, Mark Sweeney and Michael Voss took advantage of each and every guest musician and created songs that fit their respective styles. Still, “Rise Of The Animal” does not sound all over the place and has a consistent character with a sturdy Hard Rock backbone and a solid foot on straightforward Heavy Metal. The album kicks in with “Rider Of The Storm” and awesome lead guitar action, pounding drumming (blame the troll named Terrana for this) and the icing on the cake that is the voice of Andi Deris. So, this song is up-tempo, Power Metal-fast, and has an addictive chorus that states from the beginning that this album will be lots of fun. During the groovy and sticky as superglue “Sock It To Me”, the voice of Marc Storace underscores the words Hard Rock while another great guitar solo puts an extra star to this hit-to-be track. In case you have an appetite for some sleazing melodies, then “Monkey On Your Back” can fix that, featuring killer vocal melodies (you’ll be humming along the chorus tune at no time) and Ted Poley’s guest singing. Well, I cannot leave the epic “Highlands” (love the bagpipes finishing and almost Irish/dancing touch) without a single comment, simply because Joe Lynn Turner delivers his characteristic timbre. I can easily get caught in speaking individually for every track because each of them has a special something to keep the listener hooked from the first spin. I mean, “Running Out Of Time” with hearty the kick-drumming and Don Dokken’s voice in the chorus is perfect for some headbanging, and the same goes for the mid-tempo but heavier “Grizzly Man”. “Rise Of The Animal” steps quickly on the limelight and will become a multi-played track for all of us who are die-hard fans of Michael Kiske’s crystal clear and powerful voice which explodes during the chorus, pushing the quality scales to red. Whatever his voice touches instantly turns to gold and I will overrule every possible objection in a blink of an eye. Ok, I am a little bit unfair here because Mr. Axel Rudi Pell lays a killer solo opening wider the way for more high-pitched and powerful singing - just perfect!

I think the new WOLFPAKK album has broken the rule of all-stars lineup not satisfying the high expectations because the tracklist keeps the mood at high levels and even the slower “Universe” works great, being a nice way to drop the curtain for “Rise Of The Animal”. The only drawback such albums have is the minimum possibility to listen to these tracks live having all the guests onstage. But we shouldn’t be greedy, right? I am hoping for a vinyl edition, so I can officially join this wolf pack...