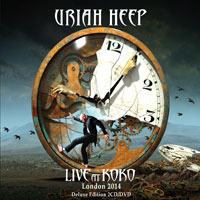 I am sure that it’s rather difficult to choose what to buy (unless you’re a die-hard fan/collector) when a live recorded album also gets the DVD/Blu-Ray treatment. I mean, with the latter aside from the audio part you also get the visual aspect of the show, so for some people choosing is a no-brainer. Still, I think there is a good value to get the audio format of live album (especially if it’s on vinyl) because there is a good chance to miss the really good stuff by having your attention distracted but what is happening onstage. And no, this is not the same with seeing the band live and feel the music hitting your chest... British longtime Hard rockers URIAH HEEP have released the hearty double CD “Live At Koko” packed not only with the classics but with some new tunes, and this to me means that this lineup is not a bunch of music performers but real musicians. You see, there are many examples with bands milking their past and at the same time being dead without producing new music that can actually stand side-by-side with the older material.

After putting aside the visual part of this release, one can focus on the music that in the case of URIAH HEEP is (still) equal to striking gold. Because bands in the Brits’ status live and breathe music and this becomes evident in the way they perform the old and the new songs. I am in no position to tell if there are overdubs or rerecorded parts and honestly to my unprofessional ears everything sounds live. Bernie Shaw’s characteristic timbre leads the band to the party atmosphere inside the UK venue that, judging by the audience’s response during the song breaks, must have been packed. There is a great nostalgia feeling shining through both the old and the new songs which is also a painful reminder that there can be no other band like URIAH HEEP. In case you’re wondering if the concert-atmosphere gets lost in the mix, I will refer you to the riff-driven “Overload” which Mr. Shaw preambles by saying “alright, let’s have some fun tonight, shall we?” and then let's the Hammond do the rest.

“Traveller In Time” is actually the best title for an audio trip back in time, since this song was created four decades ago but still sounds current and relevant to URIAH HEEP’s active discography. I have a sweet tooth for Hammond melodies, so the amazing “Stealin'”, the goldie “Gypsy” and the latest “Into The Wild” do the trick for me, while the new “Can't Take That Away” (love the bass phrases here and the main riff) and the slower “One Minute” underline my words about how URIAH HEEP are still active and not a bunch of retirees. I may sound harsh but really I am fed up with all these legendary bands which have lost the energy/interest of writing new music. The groovy “Nail On The Head” with the sing-along part, the crowd pleaser “Lady Black” and especially the epic “July Morning” are the easiest picks as the highlights of this live recorded release. Sure, I would love more audience sounds, especially in-between tracks, but still the recording seems to have spent the minimum time in the studio.

To be honest, I didn’t expect to be disappointed by URIAH HEEP and now I feel more intrigued to get the Blu-Ray and see what was going on onstage, while I wouldn’t leave out of the question the vinyl format because - trust me - the live recorded music sounds live-er when the needle touches the grooves...