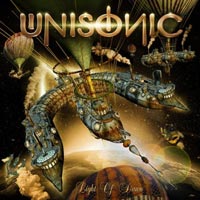 It’s really hard for a new band to supersede a most successful debut but when we are talking about UNISONIC and this lineup, then this unofficial rule goes down the drain. Really, did you expect to get something less than great music from UNISONIC considering the awesome self-titled LP? Ok, I am exaggerating a little bit but no one can deny the fact that wherever Michael Kiske is involved, then magic is happening (no, I won’t discuss, “Pink Bubbles Go Ape” or “Chameleon”) - especially here, with such highly skilled musicians. And yes, I will follow the cliché path and underline that Kiske reunited with Hansen, even though I consider this kind of irrelevant to the undeniable quality of “Light Of Dawn”. In case you have missed the existence of UNISONIC, let me put this in layman’s terms; this is not a HELLOWEEN wannabe, and honestly I am happy about it...

...because this band remains true to its initial purpose and that is to play Hard Rock with catchy and sing-along melodies. This is exactly the case with “Light Of Dawn” that is better than the already impressive debut. Sure, the combination of the guitar lead and drum roll in “Your Time Has Come” is enough for some to rejoice as they walk down the memory lane, and honestly, I cannot blame them because the high singing pitches and the heavy rhythm section do have this effect (the guitar break after the solo will bring tears to your pumpkin eyes). I think this song, along with the amazing “Find Shelter”, are enough to shatter all these unconfirmed rumors that Kiske hates doing Metal... yeah, right... As I said, UNISONIC have nothing to do with resurrections and other creepy stuff, so expect to get a full dose of Arena/Hard Rock themes and melodies like in “Exceptional” and I will simply use the song’s title to describe the addictive chorus lines that I am sure you’ll be at least humming for day one. The tempo slows down in “When The Deed Is Done” but not too much because the hard hitting and fat rhythm follow, being backed up by the distinct bass line that sets the mode to 'full Hard Rock'. I guess I should also credit the subtle but most effective keyboard lines for setting the mood close to being considered as a power ballad. Yeah, Dennis Ward has done his part in this album’s magic when sitting behind the soundboard as he is responsible for the recording and mixing. In case you have a sweet tooth for night-driving music, then “Not Gonna Take Anymore” and the up-tempo “Manhunter” are winning-choices, so crank 'em up and join Michael in singing the catchy chorus.

The tracklist has no weak moments but if you still need to pick a frontrunner, then “Night Of The Long Knives” will do it for you. The verse-bridge-chorus structure, the killer bass lines and most powerful vocals are some of the reasons this song stayed on repeat-mode for quite a while, reminding me that sometimes simple songs are the ones we remember and sing-along the most (and also, the most difficult to compose).

I hope UNISONIC will not be a short-lived project because judging by the two LPs, things are only getting better. Maybe it’s about time to get this band on a plane to cross the Atlantic and head north, right? Hands down, this album is absolutely recommended and totally addictive from start to finish.