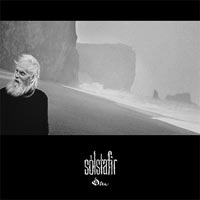 I don’t know if something like that does exist, but it would be cool to have music or some kind of a soundtrack that is perfect for every season. Yeah, I can think of a couple of Black Metal albums for winter, some Hard Rock/AOR for summer and if I want to stop beating around the bush, I’d say SÓLSTAFIR’s “Ótta” is being absolutely perfect for autumn that is on the chilly side. And I am saying this despite the album's winter-looking cover artwork and the strange concept, but let’s take one thing at a time, right?

The lyrics are written in SÓLSTAFIR’s native language (Icelandic that is), so if you have no clues about this, then be ready to drop your guard when it comes to non-English speaking bands. These strange-sounding languages can be really tricky to combine with music due to the different than what we have been used to pronunciation. At the same time whenever this combination is successful, then the result is ten times better from using the easy-to-the-ears English language. To my ears, SÓLSTAFIR are using their language as part of the music, painting a great picture where what the lyrics are saying becomes of low priority. After all, a short internet search can easily unlock the language barrier, so the lyrics cannot/shouldn’t prevent you from enjoying the trip SÓLSTAFIR have set up for you via the eight tracks clocking in almost one hour of music. Apparently, the album is based on a concept following a relaxed Icelandic time measuring system consisting of eight three-hour time intervals. Yeah, the album starts at midnight and - obviously - ends before just before that. As you might have guessed, the music is moody, atmospheric and in times up-tempo but in total I’d say it’s powerful all the way. You see, sometimes there is no need for ultra-heavy distortion or blast-beat tempos to overwhelm the listener with emotions just like “Lágnætti” that opens the album with a totally unconventional way; slow and atmospheric with keyboard tunes and vocals. The music slowly builds the big picture (following the birth of a new day I guess), so be ready to dim the lights and crank the volume up for maximum pleasure. The guitar distortion enters as the song speeds up but still keeps the winter-like atmosphere intact. Like I said, the Icelandic language fits perfectly the music and the title track of the album is a great example; this song slowly builds the tension with the awesome banjo-sounding arpeggios and the subtle high-hat action wrapping around Aðalbjörn Tryggvason’s most characteristic timbre (pay closer attention to the vocalisms near the end). The main melody and groove is extremely addictive, so I am sure you will get stuck with this before moving to the next one. “Miðdegi” is the shortest and fastest song of the album, being driven with killer bass lines while I saw some THE GATHERING magic during the rhythm part of “Dagmál” that is equally catchy. The album closes the day-cycle with the eleven minutes of “Náttmál”, so expect to be mystified with the down-tuned riffs and the almost Organ-sounding keyboards that set the perfect stage for the creeping night only to lead you to the beginning of the day/album.

I really enjoyed listening “Ótta” tracking down the changes of the day via the music while observing the autumn color-altering habits. I guess this is an album that you might consider as not-easy to listen but I think that means that it needs more time to enjoy its full potential. You see music is like food: it was not meant to be fast-food... it needs time like all good things in life.