Evergrey - Hymns For The Broken 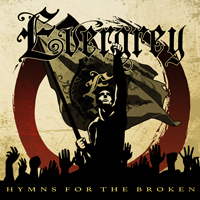 Sometimes I refuse to deal with a new album just like sampling a food for the first time; yeah, I am talking about the fast-food consumption of music and how most of us listen to an album for just a handful of times and then move to the next one and the next one... No, I did not walk this crazy path with the brand new EVERGREY album “Hymns For The Broken” because none of their works has been easy to absorb and consequently easy to enjoy. Add to this the fact that this underrated band came close to call it a day and you will understand that this is not an easy-to-absorb album.

Without knowing all the dirty details, I think that EVERGREY reached a crossroads of shorts and had to choose how to proceed. After having chosen to go on, this album should work as a catharsis and a way to reestablish the band after having gotten rid of the luggage that was holding it back. No, “Hymns For The Broken” is not a happy album; on the contrary, it’s a dark one (and maybe the darkest one) feeding from all the fears everyone has to face and come out broken but still alive. Yeah, I am talking about the phoenix analogy, so get ready for a bumpy ride as the album keeps spinning. I guess you should have checked the excellent video clip for “King Of Errors” by now so you know how powerful the album kicks in. Everything we love from EVERGREY is here; the eerie keyboards, the groovy tempos, the sharp riffs and on top of everything, Tom’s characteristic and most expressional singing. Really, there is nothing to complain about and, in fact, I see some of the passion and inspiration the “Inner Circle” had. Sure, the albums that followed were quite good (especially “Torn” and “Glorious Collision”) but there was something missing from the equation. Songs like “Wake A Change” with the awesome keyboard melodies in the beginning (love how the drums enter) or like “Archaic Rage” have embraced the kind of darkness that “Solitude Dominance Tragedy” introduced more than a decade ago. The vocal melodies along with the distinct bass lines (especially in the latter track) paint a picture using all shades of grey and I’d like to draw your attention to how the tension breaks out via the guitar solo in “Archaic Rage” after these lyric lines “...’cause who we are to you does not reflect the truth”; just perfect! In the same high quality level is “Black Undertow” and I am sure you get something from the “Inner Circle” atmosphere with all those movie-like excerpts that maintain the soundtrack character the Swedes always use in every album. You can even throw some “Recreation Day” references via Tom’s most characteristic vocalisms and how the tempo picks up close to the end.

Even if sometimes I find it hard to believe what the press releases are saying in an attempt to over-sell an album, here everything sounds like the truth; EVERGREY sound refreshed, inspired and motivated and this is shown in all its grandeur during the last songs of the album, each of them clocking almost eight minutes. “The Grand Collapse” is an epic track that is built on the piano-sounding keyboard riff with the EVERGREY trademark groovy breaks and the subtle presence of Progressive elements that made this band so special (yeah, keep that note in mind during the guitar solo). The clean guitar arpeggios open “The Aftermath” and maybe the light at the end of the tunnel that those who survived this inner battle may see as they walk the last few miles. Still, the mood is kept dark being a painful reminder that this struggle can start all over again in a blink of an eye. You see, there is no end in self-improving and just like a modern Greek thinker (a philosopher to my mind) the purpose in life is to decrease the entropy that governs the (and your) universe...

Anyway, I am digressing so the bottom line is that “Hymns For The Broken” is another EVERGREY masterpiece and I am really glad I took all the time I needed to absorb this. I am happy that they decided to continue because it’s clear that the Swedish band has a lot to offer. If you already know the band, then invest with eyes closed – but in case you don’t, then this album is a great place to start moving backwards; there are great things along the way!

“We've crowned a king with no soul
When all doors are closed, we walk alone”

Evergrey @ The Forge, Joliet (US)

Evergrey - The Storm Within