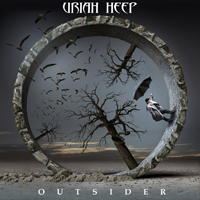 URIAH HEEP’s 24th album “Outsider” comes three years after 2011’s “Into The Wild”. This album sees the band without the services of longtime member and bassist Trevor Bolder who unfortunately passed away last year due to health problems. Bolder had been with the band since 1978 and with the exception of his early 80s recordings with WISHBONE ASH (“Twin Barrels Burning” - 1982). He along with original guitar player Mick Box were the oldest members of the group. The new bassist is Davey Rimmer who is known to many through his work in ZODIAC MINDWARP.

“Outsider” follows the path of the previous two albums, “Into The Wild” and 2008's “Wake The Sleeper”, with the band using/recording updated and contemporary studio sound. The typical URIAH HEEP wall of sound from the bass/drums, guitars and of course the famous Hammond organ played by Phil Lanzon - a constant member since 1986 - is still present, but the studio production to my ears sounds a bit plastic and aseptic. In other words, it lacks the warmth and the feeling and somehow it does not do justice to some really nice songs in this album. Obviously, this is my personal opinion and I do not expect people to agree with it.

“Speed Of Sound” opens the album and in a way gives the listener a good sample of how the whole album sounds. “One Minute” that follows starts with a distinctive piano melody and finds Canadian singer Bernie Shaw - a URIAH HEEP member since 1986 - in really excellent form. The song has gotten lot of airplay by the digital radio station Planet Rock in the UK. Nevertheless the album unfortunately sounds to me a bit repetitive and although you can get a few more nice moments, as it happens with “Is Anybody Gonna Help Me” or “The Law”, they are not enough to push the entire effort to a higher level. Of course, all the band's musicians are excellent and you can sense that throughout the album, but somehow there are no songs to make a difference.

Without doubt, URIAH HEEP is a historic and in a way gigantic band and although this album is not bad, it cannot stand close to the achievements of the past. I could not help it but many times over the last month that I spent sporadically listening to this album, I returned to my old copies of “Demons And Wizards” and “Look At Yourself” which to me remain some of the best records in the history of Heavy Prog Rock. As for this album, it is only recommended for the real die-hards of the band.