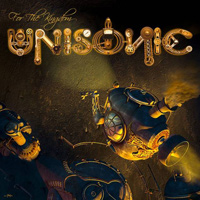 It’s beyond the shadow of doubt that seeing those two names on the same lineup after all these years, feels like a dream come true, even though this happened under way different circumstances. If you have no idea what I am talking about, you’re either young or some brain circuit failure erased a huge part of your Metal memory. Whatever the case maybe, it’s true that UNISONIC has Kiske and Hansen on the lineup but not for some resurrection kind of band. Yeah, Dennis Ward and Michael Kiske put together this band/project, and judging by the reaction of the Metal scene to the self-titled debut, they did good. Currently UNISONIC have all cylinders firing and are almost ready to release the highly expected sophomore album, so in the meantime the digital EP “For The Kingdom” comes to stir even more our enthusiasm.

The EP contains two new tracks and the rest were recorded during UNISONIC’s performance at Czech Republic’s ‘Rock Festival’ in 2012, so one could say it is nothing special. You see, nowadays the collector’s instinct has been buried under the single-song purchases and the unbearable shadow of the fast-food music producing industry. I mean, if this EP was released a couple of decades ago on vinyl, we would be talking about a potential collector’s item. Anyway, things do change, so it’s better to talk about the music itself and in particular the self-titled track that opens the EP. This will be on the upcoming UNISONIC album, so it’s a perfect teaser and an up-tempo song with a distinct Power Metal direction that will put a huge smile on every Kiske’s follower. The vocal melody is extremely catchy and most importantly sung by Michael’s powerful and crystal clear voice that is still being ignored by the passing of time. But this is not all; the guitar work spits fire with a driving riff and an awesome solo, while the rhythm section is there to shed some light on the Hard Rock side of UNISONIC. The double bass drum action and the killer bass sound are the icing on this cake and I am sure it will get a repeat-mode-on status right away. “You Come Undone” is an exclusively for this EP but cannot be considered as a B-side, simply because the tempo is addictive and the Hard Rock profile steps on the spotlight as Michael nails at ease the vocal lines. By the way, the orchestrations in the background are a nice touch in the music of UNISONIC, so my guess is that will be getting more of this in the upcoming LP.

The live recordings have managed to capture the audience excitement of seeing live this lineup and among the four songs, I chose “Unisonic” as the star as it bursts out after the intro and pre-recorded samples. You can imagine the crowd’s reaction to the first lyrics sung my Michael and wait until the chorus to feel the goosebumps as the audience screams “Unisoniiiiiiiiiic”; just awesome.

This EP has served perfectly its purpose, so now I am even more excited for the UNISONIC LP. Listening to the new tracks and the live recording, you kind of feel how well this lineup feels (check “Never Too Late” if you still don’t believe me), so one can only expect magic to happen. Ok, now that the new album release date has been set, it’s time for UNISONIC to cross the Atlantic...