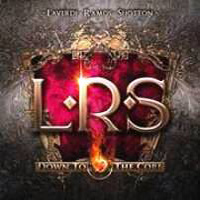 This is one more collaboration that has to do with artists or partners of the Italian label’s roster; the L.R.S. moniker derives from the surnames of the three musicians that were brought together by producer/multi-instrumentalist Alessandro Del Vecchio and the purpose of this camp is of course to serve some high quality AOR/melodic Rock the way most outfits or one-off projects in the Frontiers catalogue the last decade or so.

Unfortunately the project here does not tell the story in a pretty good way. The result is too mellow even for AOR aficionados and the songwriting does stay far away from being credited as entertaining, or even noticeable. And that’s a pity since La Verdi’s vocals were more energetic when he was a singer in 21 GUNS back in the 90s; here the charismatic singer gets too syrupy trying to sing about love themes, while the guitar work by Josh Ramos (HARDLINE, THE STORM, TWO FIRES) is not as expressive as in his past career. The drums of Michael Shotton are semi-pounding but he’s the drummer anyway, so we shouldn’t complain, huh. The big problem, to cut a long story short, is that the songs themselves do not have the energy needed to attract the listener, and by ‘energy’ I do not mean a more bombastic sound or some more heavyhittin’ performance but only some spark to ignite the AOR engine, let aside the fact that the resemblance to enough of the JOURNEY catalogue is not out of sight I’m afraid.

I admit I got bored after listening to “Down To The Core” for three times in a row. I do not know if it’s me or this overloaded - for one more time - ‘collaborations’ thing that has little to offer in terms of originality or at least neat entertainment to the ear. So, pass by and you won’t feel you wasted time and money for this average release. Nuff said...