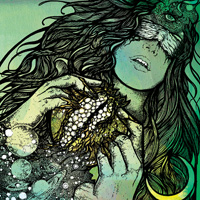 Having a lot of music at arm’s reach is not always a bad thing; of course it can be overwhelming, especially when you don’t want to miss something really good but at the same time searching for what to put on the stereo can be extremely rewarding. I like to browse through album covers and choose whatever seems to fit my mood and rare are the cases when I came up with something totally inappropriate. So, being in such state, I picked Salt Lake City’s DWELLERS second album, entitled “Pagan Fruit” for two reasons: a) the album title is interesting and b) the cover artwork has some 70s type psychedelia, so I was sure the music would be at this ballpark. Like I said, I am rarely wrong at my choices, so “Pagan Fruit” and DWELLERS’ Gut Rock (the band has invented this term) affirmed once again my gut feeling (no pun intended).

The slow tempo start, the echo/delay effect on the slightly distorted guitar and the almost Jazz groove of “Creature Comfort” smelled vintage from miles away but not in a pretentious way. The band sounds confident, so the music does not come as a cheap-copy/paste product but there is a lot of inspiration going on. The subtle and most natural drums and the Blues-type guitar lead action will sound perfect for summertime that has - at last - stepped on our US footstep. You may start thinking of the Swedish vintage Rock scene during the a little bit faster “Totem Crawler” or even throw some WOLFMOTHER in the mix, but no matter what, the result will be the same; analogue-sounding recording, smooth flow and killer high-hat action. Pay attention to the palm-muted riff and the bass rhythm as they lead to the awesome guitar solo and you will soon realize that you are listening with eyes closed. The Hammond-sounding keyboard action of “Return To The Sky”, the PINK FLOYD-esque “Son Raven” and the heavier church organ-driven “Call Of The Hallowed Horn” are the tracks that will stand out during the first album spins. Especially the eight and a half minutes long of the latter song will prove that DWELLERS can sound heavier without losing an inch of the vintage and psychedelic character of their music. The faster drum-lead part with an abundance of space-out effects come to climax this track while the Ken Hensley-esque keyboard will back me up when I say this is truly inspired music-making. And let’s not forget Raven Quinn’s guest backing vocals that give an extra push and add one more vintage flavor to this great track.

This album sounds straightforward during the first spins but I think it is a way to lure you in the world of DWELLERS where you can use a huge variety of colors to paint what you are seeing. Yeah, I may be wrong with choosing this band’s influences but this is the beauty of music; to stimulate your brain, lock your absolute focus and make you forget whatever may be troubling you. I hope there is a vinyl edition on the making because I’d love to blast “Pagan Fruit” through my speakers during one of those awesome summer nights.

P.S.: If I failed to convince you, you can listen for yourself HERE.