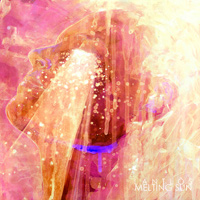 LANTLÔS is a band from Rheda, Germany, where it was formed back in 2005 as a duo with Markus Seigenhort and Angrrau on the lineup. The name derives from a German dialect meaning “man without homeland”, reflecting Seigenhort’s belief that no country is his home. In 2008, they released their first and self-titled album and then several lineup changes took place. Last year saw Seigenhort as the only member of LANTLÔS and the fourth album, “Melting Sun”, was released with Felix Wylezik and Cedric Holler as session musicians.

The music of LANTLÔS can be described as a mix of several music genres and I’d use Doom Metal, Ambient and Post Rock. Anyway, the Germans use simple song structures with many melodic and Ambient layers approach as it happens in the rather minimalistic “Golden Mind”. Occasionally the music gets more intense, with distorted guitars and heavier riffs, but still, the fantastic melodies steal the spotlight and I am sure you will be listening with eyes closed. I really liked the guitar-driven Post Rock parts but I cannot say the same about the vocals that I found to be lukewarm, failing to fit the music and the atmosphere created.

“Melting Sun” is a very well-crafted album with a great production, that mixes beautifully the elements of the music genres involved and I'm sure that you will enjoy this album in its entirety, no matter the style. Get ready for a beautiful journey with LANTLÔS on the driver’s seat.