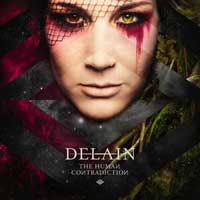 Female-fronted Symphonic Metal bands have stopped being the hottest topic when it comes to new music release. The competition has become really tough, so if a band wants to stand on top of the still-growing pile, it has to do more and sometimes think outside the box. Another factor that I think plays an important role in the level of success of such bands is the live shows because from the studio anyone can sound incredible (blame the computers for this). My relation with DELAIN started backwards because until the most recent live performance in Joliet, I hadn’t paid serious attention to the band’s discography. But the intense show and the solid setlist made reconsider, and after having listened to the brand new “The Human Contradiction”, I am glad I did.

Before this album, I was thinking of DELAIN as too-modern or too-mainstream for my taste, since their music was closer the likes of WITHIN TEMPTATION. No, this is not bad but at the same time it is not quite Metal and there is not enough room for such bands inside the mind of a metalhead. “Here Comes The Voltures” is a strange choice for an album-opener because it starts extremely mellow with a cappela singing and piano-driven melodies before getting heavier the moment the guitars have entered. Thinking of the NIGHTWISH’s Olson-fronted albums comes natural but you have to trust me when I say there is more than this. Yeah, “Your Body Is A Battleground” is more heavier and groovy as hell, even though it fails to move away from the NIGHTWISH shadow but not for the bad reasons you may be thinking. In this one, Marco Heitala does some guest-singing and forms a most-powerful duet with Charlotte Wessels that reaches a climax during the riff driven and hence heavier breaks. The symphonic orchestrations blend really well with the guitars, even though I am sure they will take away part of the fun during a live show (pre-recorded parts tend to do this). In the same quality level is “Sing To Me” that is the second song featuring the Heitala-Wessels duet.

The main characteristic in the music of DELAIN is the distinct grooves and the trademark vocals delivering catchy-melodies that is easy to follow and ultimately have a great time. “My Masquerade” (awesome how the backing vocals blend with the leading ones) and “Sing To Me” have this effect and to some extent remind me of AMARANTHE but without the growling parts. “Tell Me, Mechanist” is where Charlotte shines with her distinct timbre and expressional singing, delivering once again beautiful melodies that make a nice contrast with the growling vocals. The album closes on a high note with the epic “The Tragedy Of The Commons” and the guest singing courtesy of the new ARCH ENEMY singer, Alissa White-Gluz. I like the way DELAIN have mixed on the same canvas the pompous orchestrations, the choir-like backing vocals and Alissa’s characteristic extreme singing and I’d love to see the Dutch band walking on this direction more frequently.

“The Human Contradiction” is a very good reason to start dealing with DELAIN that are working their way up to the premier league of the female-fronted Symphonic Metal bands. Sure, the references are evident in every track, but if you like this sound, you should be able to also see the potential singing and music-composing wise.

Delain @ The Forge, Joliet (US)

Nightwish @ The Rave, Milwaukee (US)