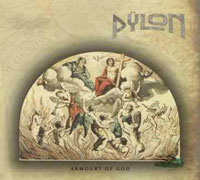 How many Doom Metal bands do you know from Switzerland? I thought so, none. PŸLON is a Doom Metal trio, formed in 2002, and 2 years ago, after the successful “Doom” as the second part of their album-trilogy, decided to release the third and final part, entitled “Armoury Of God”, demonstrating the Christian element in their music as usually happens with bands of this genre. “Armoury Of God” contains 11 tracks, full of religious deference and tortured riffs, faithful to COUNT RAVEN / SHEAVY tradition that necessitates the Ozzy-cultured vocals holding the scepters, although here the comparison between Matt Brand and Ozzy Osbourne is, at least, unfortunate.

Well, how easy is for a Doom Metal band to include 11 tracks in a record with the perspective to be a successful one? “Not at all”, I clearly have to admit, as the danger of the pointless repetition and the absence of inspiration lurks truly deep inside and that is exactly what we have to deal with here, in PŸLON’s latest album. “Armoury Of God” includes enough good Doom Metal songs like “The First Church” and “Hollow Sky” with lots of heavy, monolithic riffs and lyric readings from Matt Brand. In “The Worm Within”, “Gravestar” and “Hunter Angels” we meet such an unfortunate effort for Doom Metal that the production doesn’t help a lot, thanks to the raw and flat sound, making the entire result a true Doom fail to every year-trained doomster’s ears. Unfortunate also, was the attempt to cover a difficult Doom hymn, CANDLEMASS’ “Somewhere In Nowhere” from “Tales Of Creation” album which has coincided so closely to Messiah Marcolin’s glorious and inimitable timbre, characterizing PŸLON’s attempt an absolute failure. Thank God, “Death Is All Around” comes to drop album’s curtain and save the day after 66 minutes of good, but mostly, bad times of low-tempo music, with its COUNT RAVEN-esque tunes and the dominant bass, being my favorite track from the album.

If “Armoury Of God” was an Ep release, containing 6 tracks maximum, it would be one of the top Doom Metal albums of the year so far and now we would be talking about the first, pioneer band from Switzerland that dare to prefix thy Doom instruction worldwide. If the Armoury of God contained such equipment, the war would be already lost.