Descend Into Despair - The Bearer Of All Storms 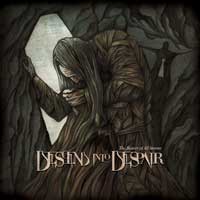 My dark journey through the Eastern Europe continues through Slovenia and BLEEDING FIST’s new compilation before stopping at Romania and DESCEND INTO DESPAIR’s debut release. If you think that this band plays Doom or Funeral Doom, then you couldn’t be more right. DESCEND INTO DESPAIR was formed in 2010 and unleashed the first effort in the form of the demo “Wings Of Solitude”. In 2011, a five-song EP was released and one year later was followed by the twelve-minute long single “Hierophant Of The Night”. This year things got a bit more serious and the Romanians have released their first full length dark opus “The Bearer Of All Storms”.

First of all, it might come as a shock to you that the album clocks at approximately one hour and a half. At first, I was a bit skeptical about it, because it is kind difficult listening to an album for 92 minutes non-stop and not getting bored. Fortunately, the Romanians have done a very good job with “The Bearer Of All Storms”, and even if they don't offer something groundbreaking or something that goes beyond the boundaries of Doom and Funeral Doom Metal, they keep the listener interested throughout the album. The tracklist contains seven hymns to desperation and depression, so you have to be in a specific mood before start listening if you don't want to get floored. Happy melodies and up-tempo moments are absent as the band hits the listener with sad and depressive melodies without mercy, building up a dark and suffocating surroundings with vocals that sometimes are whispering, and others are brutal and quite high-pitched, reaching occasionally a screaming level. And this is not all; some songs have violin, church organ and keyboard melodies, making the album’s atmosphere gloomier while bring to mind bands like MY DYING BRIDE.

“The Bearer Of All Storms” is a great album with well-crafted music that, despite the long time duration, will keep your interest burning as you are going all those dark feelings and moods. Are you up for this challenge?