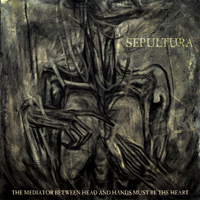 SEPULTURA is without a doubt the most popular ambassador of South American Metal. This band has gone through radical changes seeing the Cavalera brothers - the founding members - leaving the lineup, something that surely affected the already gathered momentum.

I considered myself as a fan of SEPULTURA, since the era of the mighty “Schizophrenia” album, and I had the privilege to watch the band performing live at their prime, during the “Arise” tour. But after the release of “Roots”, I became rather alienated as I never liked the Groove and Nu Metal elements. I retain a healthy dose of respect for the Cavalera brothers, but I am not a fan of their projects (i.e. SOULFLY, CAVALERA CONSPIRACY).

My expectations for their upcoming release, oddly titled “The Mediator Between The Head And Hands Must Be The Heart” weren’t exactly high. But from the very first seconds into the opening track, I was pleasantly surprised! The band plays once again straightforward Thrash, but please, don’t expect an “Arise” or a “Beneath The Remains” clone; most of the tracks are furiously fast, while an ominous dark atmosphere is prevalent. The cornerstone of their sound is the amazing guitar work of Andreas Kisser who I happen to consider one of the best guitarists of this genre. Being the most proficient musician in the history of the band, Andreas has contributed greatly to this album, providing intense riffing and some very cool leads and guitar harmonies. Yet, I still believe that he could improvise a little more, enriching ever further their sound. The band has chosen to completely omit the Nu-Metal elements from its sound, while retaining a Tribal flavor, mainly in the form of traditional percussion parts. The band’s new drummer, Eloy Casagrande, has done a very good job with a pretty different style from Igor Cavalera. I would like a cleaner production since Derick Green’s vocals are almost muffled by the distortion.

The album’s opener “Trauma Of War” is a furious chaotic Thrash track featuring excellent riffing. Another great riff is the basis of “The Age Of The Atheist”, a track where Eloy Casagrande showcases his drumming prowess. Speaking of great drummers, Dave Lombardo makes a guest appearance in “Obsessed”; a real killer thrashing track surely influenced by the mighty SLAYER. The slow tempo and melancholic “Grief” is a very fitting addition to a mostly furiously paced album.

The bottom line is that this is SEPULTURA’s finest release since the “Roots” era. The band sounds heavier and darker than ever, without mimicking their glorious past. The current incarnation of SEPULTURA showcases some potential to rejoin the extreme Metal elite.