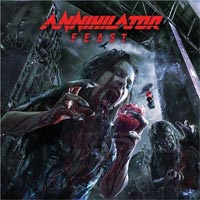 Usually Jeff needs about two years to produce a new ANNIHILATOR album but this time the in-between-time was expanded to three. Without a shadow of doubt this is a long time waiting, especially if you have been following this Canadian Thrash breed from day one. If you haven’t, let me tell you that ANNIHILATOR has been a consistent band with great discography despite the fact that there were too many lineup changes (especially behind the mic). Anyway, this is old news because for the last decade Jeff has formed a solid songwriting alliance with Dave Padden keeping the ANNIHILATOR spirit alive and kicking as it happens in the fourth LP entitled “Feast”. Keep in mind that the following lines were written by a fan of this band, so there is nothing objective...

I’d expect to see Hell freezing over before getting subpar music from ANNIHILATOR (“Remains” is also included) so the fast riff of album opener “Deadlock” continues this tradition. You can call this a typical Waters song and I would not disagree with you; the fast guitar action, the groovy rhythm and Padden’s harsher than usual vocals meet every requirement for Canadian-raised Thrash. If you listen closely, you will distinguish the JUDAS PRIEST influences via the straight forward song structure just before getting things complicated during the fret-melting solo (yeah, Mr. Waters has not lost his mojo). And then, the double-bass drum and the fat guitar are spearheading towards a powerful ending. The out-of-tune sounding arpeggios of “No Way Out” will wake up some “Alice In Hell” memories shining through the natural sounding production of the album (yeah, Jeff is also responsible for this), while the nice rhythm break brings a nice “Carnival Diablos” breeze before getting back to Thrash, working in perfect harmony with the funky guitar fills.

Ok, I have to admit that the weakest link of “Feast” is the ballad “Perfect Angel Eyes” that sounded to be rather bland but maybe this is because I got some “Set The World On Fire” memories (and the mediocre vocals of that album). On the other hand, this is just one song that is not enough to change the riff-driven flow of the rest of the tracklist. “Demon Code” restores the Thrash balance with the trademark riffs and the harsh singing I’d like to hear Padden using more. It would be a sacrilege to say that “One Falls, Two Rise” tries to be the new “Alison Hell” due to the similarities, especially in the intro. Also, it would be an unfair treatment to the song that I think stands slightly higher than the rest; the vocal melodies and the nice bass lines build the perfect tension that explodes as the tempo gets into the familiar ANNIHILATOR high bpms. The eight and a half minutes feature harsh singing and more than a handful of riffs and the ­- yet again - trademark melodic lines where I have to give additional kudos to the bass sound stepping into the limelight for a decent amount of time.

This album presentation would easily end here but I cannot leave the bonus disc without a few comments. For reasons I don’t know, Jeff decided to re-record some older songs touching almost every ANNIHILATOR album. Musically, the songs sound great and in fact you’ll welcome some changes here and there. But, and despite my efforts, I could not get used the singing in some tracks, especially during the high-pitched vocal parts, like in the one before the solo break of “Fun Palace”, the chorus and high-pitched (again) part of “Alison Hell” (the new guitar fills are great). But this does not apply to every track, since “Welcome To Your Death W.T.Y.D.” sounds awesome (love the different riff structure just before the faster part), so I guess it’s a matter of taste. At the same time, it’s nice to have all the tracks at the same level of production and mix, and really enjoy the lead guitar work that has made this band so famous back in the end of the 80s.

Despite the fact that “Feast” seems able to enter the charts after many years, I still consider ANNIHILATOR as an underrated band, so please get also the bonus disc and then take a long dive in the band’s entire discography. I am sorry but you’ll quickly understand what you have been missing... and keep in mind that...