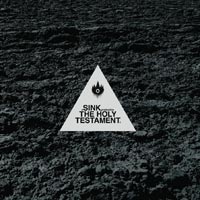 I’m always skeptical when it comes using tags to describe music because most of the times you get to hear something totally irrelevant. In the case of SINK’s new offering “The Holy Testament 2” I was even more skeptical, firstly because this was tagged as Black Metal, Drone, experimental and psychedelic and secondly because I wasn’t familiar with their previous works. For the history, I’ll say that SINK have released two EPs, a split album with UK’s Drone/Doom band MARZURAAN and two full-length albums.

Before actually listening to the album I was pretty sure it would have nothing to do with the aforementioned genres or at least with most of them. So you must understand my surprise when I realized that the music was exactly as described. As “Necropolis” started I was quickly drawn by the fantastic melodies and atmospheric composition, Doom-ish tempo, icy riffs, ambient sounds and deep narrative vocals. “Descending Skies” continues in a more relaxing way, despite the heavy distortion, but after that comes “Joy Of Life” (a rather ironic title, considering the music) and hits you in the face: a really heavy song and a great example of Dronewith intense drumming, Gregorian-like chanting, amazing melodies and a touch of Industrial. “Parallel” may calm things down again just for a while since the samples (working in the background) and the tunes create a haunted and twisted feeling, wrapped up by a dark atmosphere. Next, there is “Dominion”, a sixteen minute epic track with an almost disturbing and gloomy sound: the murky atmosphere, the repetitive icy noises and incomprehensive voices making you think that you’re inside a dark and forbidden place with no way out. The last song, “Recursion”, is more of an ambient song, with a slow temp and atmospheric samples that closes the album in a less agitating way.

I always say that good music takes you in beautiful places, especially when it comes to ambient or Doom or Black Metal. In the case of “The Holy Testament 2” though, most of the places the listener will visit, will not be so relaxing and beautiful, but rather intense, haunting, with a feeling that he's lost in a dark maze, looking desperately to get out. It is a great example of ambient, Drone music, so fans of these genres should definitely jump into it.