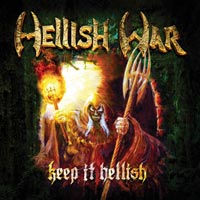 As I have said many times in my reviews, I have the strong impression that Euro Power Metal has become long ago a saturated Metal sub-genre, in all its cliché musical elements and singing arrangements. But when this specific style is presented by bands allocated in different regions of the globe, the result can be quite entertaining and – why not? – more than fascinating. HELLISH WAR is such an example.

The Brazilian quintet has released a couple of albums in 2001 and 2008 respectively, while they exist since the mid 90s. I do not know if they lack hard work or are perfectionists but it took them five whole years for their third ‘critical’ CD to see the light of the day. “Keep It Hellish” will be adored by fans that have IRON MAIDEN and RUNNING WILD at the top of their playlists. It has songs that are long in duration but do not bored the listener after all, and that’s a strong point for the band. It also boasts this set of solo parts that are rich throughout each song with a strong reference to the British legends while the rhythm parts owe a lot to the German pirates. The double bass drumming is not nonstop, so it leaves space enough for the songs to breathe while the galloping bass shall make you bang your head. Not to forget, the vocals are rough here and screaming with a primitive timbre and a take-no-prisoners attitude that unveils a genuine Metal singer who’s also a Metal fan.

“Keep It Hellish” is easily the band’s most ambitious album to date, in case you are familiar with their so far discography. It has the power and vigor that is absent from most releases and bands in this current Metal category the last years. Insert the CD in your audio system, crank it up to ten and remember how post-80s Power Metal was used to be before it became to cheesy and silly. Now, what I hope is that it won’t take another five years to have a new album from these excellent Brazilian metalheads.