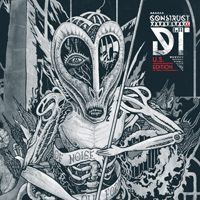 DARK TRANQUILLITY have been a constant power in the melodic Death Metal scene and let us not forget that along with IN FLAMES were the pioneers of this Swedish wave. The impact in the Metal scene was so powerful that an extremely big number of bands jumped onboard to have a share of this pie until there was nothing left... Sadly this genre become saturated to the point that the metalheads started losing their initial and flaming interest. But DARK TRANQUILLITY continued on the path they opened and with every album expanded their sound bringing the melancholy that nowadays is considered as their trademark. Sure, many fans (older in their majority) are still talking about “The Gallery” or “Projector” missing all the great music the Swedes have written the years that followed. Add to the steady music production the amazing live performances and you will understand why I consider DARK TRANQUILLITY as an underrated band. Anyway, it’s about time to see what “Construct” has in store for us...

...and it’s of the same high quality we have used getting from these Swedes. The double guitar action, the amazing atmospheric breaks and, of course, Mikael Stanne's characteristic growling are here powerful as ever. And this is how the album kicks in with the awesome “For Broken Words”; you can feel the darkness surrounding you during the slow part of this song where the keyboards work in the background leaving Stanne on the limelight to spreading his harsh sounding sermon. And then, it’s time for the guitars to take the lead in the Swedish tradition that we often (or maybe used to) call as the Gothenburg sound. It still amazes me how DARK TRANQUILLITY use the slower and atmospheric breaks without losing points in term of overall heaviness. I guess “Uniformity” is a fine example of this successful recipe while the clean vocals come to the front and let the darkness conquer the deeper levels of consciousness. This is the type of lyricism that was always present in the music of the Swedes and the reason for still going strong regardless of the anemic production rate of new bands and most importantly of good music from this scene.

Don’t be frightened by the atmospheric parts I chose to underline because the guitars are still holding the lion’s share, so feel free to headbang during the galloping riff of the heavier “Uniformity” and praise with me the flawless sound production for giving space to the bass guitar to shine. I think this one will be part of the band’s upcoming setlist along with “Endtime Hearts” where the Gothic SISTER OF MERCY influences make an appearance via the clean guitar tunes. I think the groovy rhythm section (that is so addictive and perfect for headbanging) of “Weight Of The End” brings a fresh breeze on DARK TRANQUILLITY’s songwriting, so I cannot but to admit they sound awesome and hope to hear more of the same vein. As I said, DARK TRANQUILLITY are friends of darkness, so “Immemorial” is a proper celebration for this, but it is also a shame that this is just a bonus track for the US version of the album. I tell you, the driving melody is the definition of being catchy.

I have been following DARK TRANQUILLITY’s discography from their early days, so I knew that “Construct” would be of the same quality with the previous albums. But I think this album has walked some extra yards bringing along a couple of new ideas that seem to be working absolutely great. In other words, there is diversity in this album, something that is extremely rare for albums coming from the melodic Death Metal sound nowadays. And this is why DARK TRANQUILLITY are one of maybe the two flagships of this scene, so get this one without second thoughts.

Amorphis @ The Forge, Joliet (US)