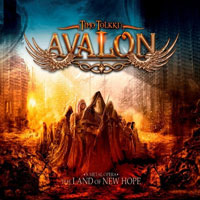 Whoever is still listening to Metal with his heart and not with his mind, while dealing with all those backstage-stories most of us think we know, has Timo Tolkki in the highest rank as a musician. I am using the term musician and not guitarist simply because Timo has shown with composing skills long before the decline of Euro Power Metal with all these bands copying each other. So, it had been a painfully long period of time without having a Metal release from him (I refuse to consider “Saana” as something more than a side-project). This significant composer/guitarist is back with a huge project that we like to call a Metal Opera. In other words, “The Land Of New Hope” is a concept album and features an impressive list of guests playing the roles of this post-apocalyptic story.

The album has been out there for almost two weeks and I am sure the majority of the music critics have already described it as nothing groundbreaking or nothing we haven’t heard before and used all those clichés we often read in fast-food album presentations written after a couple of listenings. Sure, all those descriptions are valid since “The Land Of New Hope” is a Euro Power Metal album with sing-along melodies, spirit-lifting riffs and the usual male-female singing duets most of the tough metalheads considered cheesy. But there is the other side of this coin where one can find exactly what he is searching in a Power Metal album and I believe sometimes this is a very good thing. After all, why should you say "no" to the awesome compositions that are able to make you sing and hit the reply button many times like in the STRATOVARIUS-based “Enshrined In My Memory” with the ridiculously addictive keyboard lines. By the way, in this song there is – what I consider as – the rising star Elize Ryd (also in AMARANTHE) and her most expressional singing that fits perfectly to Timo’s guitar magic. Sure, “We Will Find A Way” has a song structure based on the most used Power Metal blueprints out there, but once again, the guest singing is a huge plus and a courtesy of Rob Rock who brings along some Hard Rock quality, especially during the higher pitches. Things get a little more explosive in “Shrine” where we find on the side of Elize, WITHIN TEMPTATION’s Sharon Den Adel forming a powerful singing duet, although I’d like to hear more from the latter singer.

Such projects implementing different and famous musicians can easily turn to be huge disappointments (considering the sky-high expectations) because the composer falls into the trap of trying to write music to fit the guest’s vocals creating at the same time a fragmented album with no solid character. And in this part Timo has succeeded by keeping his Euro Power Metal foundations intact and implementing every singer in the role that serves the storyline. You can actually hear this in “A World Without Us” with Elize Ryd, Russell Allen and Michael Kiske (in order of appearance) behind the mic where the different voices come into play whenever the music needs them.

The album closes after the something less than nine minutes of the self-titled song having Michael Kiske on the lead vocals who once again shines through his trademark and power full high pitched singing. If you are keeping track of Timo’s music adventure, then you have seen him working with Michael in the past and every time it sounds amazing. Really, I would love to see an album created by those two musicians, because I strongly believe Timo’s writing fits Michael’s way of singing and I am sure I speak on behalf of all those HELLOWEEN fans who have missed those powerful vocal lines sitting side by side with Power Metal music.

Like I said the music genre and the song structures of “The Land Of New Hope” will not change the world and definitely are not reinventing the wheel (yep, this in another cliché expression) but will feed your hunger for well-written and above all well-played Euro Power Metal. If you have missed Timo’s playing, then this album is for you and I am sure it will find a spot behind other successful Metal Operas. I hope that we will hear more from Timo in the future and, why not, see a proper lineup around him.

PS: The opening riff of “Avalanche Anthem” has a “Prowler” flair, don't ya think?