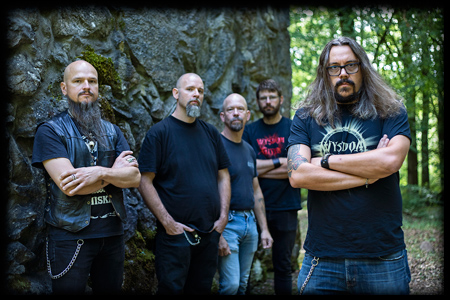 WYSDOM GIVEN was formed in 2013 and took the path many others bands have walked. The musical direction was set on Blues and Rock cover-songs and it required some effort for founding members, guitarists Göran Blomgren and Jonas Hellström (also in CRIER), to find the right people and an identity of their own.

An online add brought vocalist Daniel Myvall Hedman to the fold. Setting the initial members of the band to Daniel, Göran and Jonas. Drummer Kristofer Von Hausswolff was also drafted to the band as a part of the first line-up. Finding the last piece, a bass-player, showed more difficult though as wanted was to have someone who actually knew how to play and not only owning a bass. Paul Godfelt was the one to cut the deal and the line-up was complete. The move from covers to originals was introduced by Jonas who presented a song idea he’d been working on. Heavier sounding than what’s been played enticed the rest to contribute with shelved riffs just lying around in wait for the right time. Heavily influenced by the NWOBHM sound, topped with dark lyrics set the base for the WYSDOM GIVEN original sound.

Jonas decided to leave the band in 2015. Anders Rosberg came in has his replacement a few months later. With him onboard marks the current line-up of the band. Realizing they were up to something good with their own material, WYSDOM GIVEN set aim to get out to play live. The focus increased as did the dedication to the band and target and in the summer of 2017 WYSDOM GIVEN was first presented in the open at a local gig. Since then, the band have played various clubs and events, always receiving good response. A record is also in the makes, planned to be released in 2019.

Roaming within the dark and gloomy landscapes which were setting Sweden on the map in the mid 90’s as the leaders of Doom influenced Heavy Metal through bands as MEMORY GARDEN, VENI DOMINE and MEMENTO MORI, WYSDOM GIVEN deliver their own version of this style. WYSDOM GIVEN serves riff-y Heavy Metal which balances between mentioned bands and the classic sounds of the giants of the 70’s and 80’s. “In A Time When Victory Is Dying”, “Abandoned” and “Mayhem/Heaven” are perfect mixes of dark dynamic riffs and great original melodies. Standing out the most in WYSDOM GIVEN’s music is the arrangement between the guitars, often completing the heavy rhythm with a melody or solo-passages.

With a history reaching over about half a decade WYSDOM GIVEN have been kept a secret to most. Although receiving good reviews while hitting the stage nothing more than a couple of live videos posted online is the only evidence of this band’s existence as well as musical skills and creative songwriting.