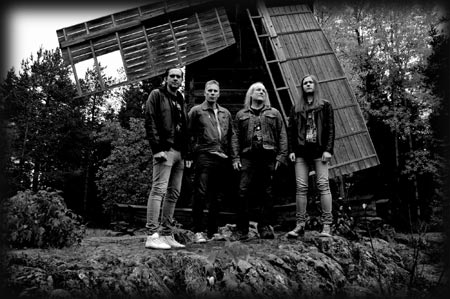 After several years together in CRAVE and an 4-track EP released in 2011, titled “Prophecy” P-O Johansson and Emil Holmqvist decided to leave the band in 2013 to lay the foundations for STYGIAN FAIR. Not long after Erik Andersson (NIGHTFALL) had joined on bass and Andreas Stoltz (HOLLOW, BINARY CREED) on lead vocals and guitar. This first incarnation of STYGIAN FAIR never made a big mark recording or gig wise... due to life's crooked path.

In the autumn of 2016, Erik left and shortly after also Andreas Stoltz followed to focus fully on BINARY CREED. Soon thereafter the band gathered new momentum by welcoming Anders Hedman (ex-WITCH) as the new powerhouse bass player. After a couple auditions STYGIAN FAIR came across Pontus Åkerlund (ex-DIMSTRÅK) and felt that his voice did convey the emotions sought for in the music. With Pontus and Anders onboard the band recorded a demo-EP “Into The Coven” in August 2017.

This band is hard  to label as it touches upon Progressive Metal as well as classic Hard Rock/Heavy Metal and Doom. Dark and heavy riffs topped with melancholy and tons of creative melodies that set STYGIAN FAIR apart from most new bands these days. Pontus Åkerlund's bright voice catches the vibe of Rob Lowe or even John Arch’s even if STYGIAN FAIR are more primitive and rough in their sound still. Also musically the references are the same; the doom and gloom from SOLITUDE AETURNUS are there mixed with the structure and technicality of FATES WARNING, also more contemporary acts as ETERNAL CHAMPION and TAD MOROSE can be mentioned. There are also more basic Rock-oriented passages which lighten things up which is why STYGIAN FAIR are hard to label. It is melodic and heavy, technical but still catchy which shows on the debut “Into The Coven” EP; a release that presents creative song-writing and a band with great talent. The future should be bright for STYGIAN FAIR.