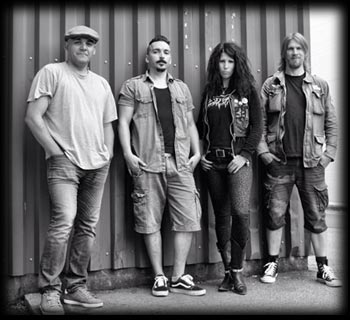 SOLID RUST was formed in Malmö, Sweden in 2012 and through the years the band has created a filthy groove for a sound. With the musical roots in the early 90’s Seattle sound in the likes of ALICE IN CHAINS and SOUNDGARDEN mixed up with more classic acts as BLACK SABBATH as well as the Bay Area scene to create a sludge, yet explosive sound.

The band members’ origin are from as various countries as Sweden, Chile and Portugal which also reflects in SOLID RUST’s sound.

In 2014 SOLID RUST split with original vocalist Andreas Intisio and after a few months’ search after a new vocalist Fia Algotsson was assigned role at the microphone. During 2016 SOLID RUST has been playing all over Sweden and was one among few selected to play at ‘Skogsröjet’ together with artists as DORO, W.A.S.P, HELLOWEEN among others.

As the Grunge era emerged in the early 90’s spreading like fire in dry grass and bands appearing everywhere adapting to the my-style’s no-style concept and for a Heavy Metal maniac that meant each band got more boring than the other. But there were a few ones standing out, the ones with a genuine musicality and ability to write songs like ALICE IN CHAINS and SOUNDGARDEN. The closest I can describe SOLID RUST’s style is the early ALICE IN CHAINS, the raw and filthy and rock hard style from debut “Facelift” and what keeps the band interesting are the dynamic and extremely tight performance from Mattias, Ricardo and Anselmo. It’s rare to have a band with this dynamic and the ability to pull off odd rhythms and still make it groove and keep it tight. The addition of Fia Algotsson at the microphone added another level to the already winning concept, a good and suitable voice for the music.

All this come is shown off on the 2015 self-titled demo, the catchy and heavy songs on it sure is laying down a bright future for SOLID RUST.