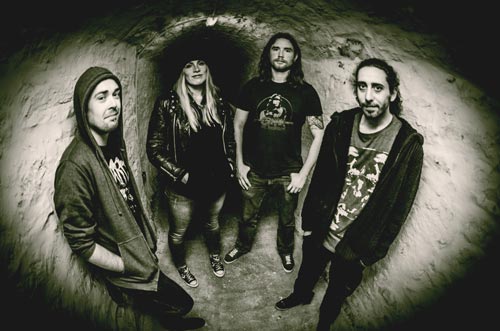 Formed in early 2015 in a cavern beneath the streets of old Edinburgh, a lead-heavy brew of old school Metal and the meatiest of 70’s classic Rock emerges in the form of KING WITCH. Drawing influences ranging from BLACK SABBATH and CANDLEMASS to MASTODON and HIGH ON FIRE, the band’s debut 3-track EP, “Shoulders Of Giants”,  recorded in late 2015, attracted instant attention and the band’s reputation has quickly grown earning them slots at Sweden's prestigious ‘Muskelrock’ and ‘Sweden Rock’ 2016.The powerhouse vocals of Laura Donnelly (ex-FIREBRAND SUPER ROCK) give KING WITCH an unmistakable touch of class while Jamie Gilchrist (guitar, ex- FIREBRAND SUPER ROCK), Simon Anger (bass) and Tam Dickson (drums) provide a rock-solid and experienced backbone. Doom-laden riffs, prog flourishes and Joplin-esque vocals combine to create a monolithic new force in heavy music - KING WITCH.

KING WITCH are currently in the studio recording their first full length album.

The influences mentioned in the band’s biography are absolutely there in KING WITCH’s music but it’s too easy to write them off as a copy of something that already exists. For sure this is a rare occasion where the basics are there but the music coming from KING WITCH is unique. It all feels fresh and new even if there’s nothing new about their style of music. The power and force on the “Shoulder Of Giants” EP is really what sets KING WITCH apart from basically all other bands in the genre. Also, Laura Donnelly fantastic voice and sense of melody is yet another element speaking in prior for KING WITCH. Doom, Stoner, 70’s Retro, Heavy Metal… It’s all there but KING WITCH doesn’t really sound like anything else.