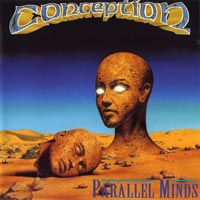 It is very unfair to know CONCEPTION as the band that Roy Khan used to sing before joining KAMELOT. However, there is an excuse for people like myself who missed this band, especially around the release of the impressive “Parallel Minds” which happened in 1993 - yes, when Grunge was on the rise and the Metal scene was having a rough time because of it. Still, the video for “Roll The Fire” got into MTV but still failed to lure my young ears which were deep into the mainstream Heavy and Power Metal, having little to no interest for the ‘too complicated’ Progressive Metal.

Yeah, I will not pretend that I understood what CONCEPTION had put together in this amazing album, so being ‘too complicated’ should go with the sentence ‘for my young and immature ears’. Be that as it may, “Parallel Minds” is powerful presentation of the guitar work by Tore Østby and the unique singing by Roy Khan who is so deeply missed from the Metal scene. Indeed, you should not approach this album just to see how Roy sounded before KAMELOT but for the golden mix of Power and Progressive Metal that made CONCEPTION known to bigger circles inside the troubled (by the Grunge rise) Metal scene. The fast guitar rhythm of album opener “Water Confines” sets one foot on Power Metal and opens the way for the solo to bring Progressive Metal into the equation. Tore Østby’s playing is not chatty so you will not lose your focus and get lost through multiple guitar layers. And this what makes this album awesome; even though it is Progressive, it does not go over the top with over-complicated song structures and multiple melodies. This is laid out in all its glory with the album-hit “Roll The Fire” starting off with some nice shredding before entering the Power Metal with Roy trademark singings and vocalism. The song gets heavier as Roy is hitting the higher pitches, while the tempo has the Progressive timing before letting the rhythm get into headbanging mode. The title-track is another Progressive Metal blueprint making me feel so bad that I totally skip on CONCEPTION back in the mid-90s...

Even though, the keyboards have a supporting role throughout the album, they are responsible for the over dark atmosphere which will definitely touch you with the ambience on the power ballad “Silent Crying”. Yes, the clean guitar arpeggios (and the almost Flamenco lead phrases), the amazing vocals and the keyboards will fill you with nostalgia and touch upon so sensitive side (come on, every metalhead has one). The amazing “My Decision” sounds like a precursor for how KAMELOT started to sound once Roy had joined the band, so CONCEPTION deserves additional credit for pushing the envelope and trying to do something more than just combining Progressive and Power Metal. Tore’s guitar work in this one is awesome as he is infusing Eastern melodies into his leads and solo, being tailored to the yet-again impressive vocal melodies (or is it the other way around?).

This is a powerful album and I dare to say a genre-shaping one, so you should feel equally ashamed with me if you missed CONCEPTION back in the day. Music is not immortal and lives as long as there are people remember the albums, the bands and those musicians who have made an impact in this scene, so make a note to get “Parallel Minds” on the turntable or CD player and revisit these powerful 10 tracks.