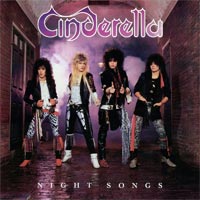 When MTV finally came to Northern Sweden in the late 80’s ‘Headbangers Ball’ ruled and I spent countless nights trying to stay awake to get to see some new videos and keep up with what was going on in the world of Hard Rock and Heavy Metal. I was never much of a fan of the LA trend and the Hair Metal genre in general. Sure, most of the bands had one or two good songs but there were a few bands standing out and CINDERELLA was one of those.

Not deriving from the glassy LA Strip as many others, instead origin from Philadelphia, Pennsylvania perhaps gave more depth and dynamics compared to the posh bands such as WARRANT, POISON and so on. I don’t know what made CINDERELLA stick on me instead of the others. But they did. he first song I ever heard was the “Nobody’s Fool” ballad which frequently spun on the channel, and not only during those few Metal hours. This song was my favorite even if I enjoyed the groovier “Shake Me” too. I remember sneak-buying “Night Songs” in the local record store and hide it from my friends who were more into the heavier music and they considered the Glam scene as being cheezy. But I still liked the music so had to get the record.

“Night Songs”, as most of the albums from the time, holds so much more than what MTV show though. Even if I still enjoy the hit-singles very much it’s songs as “Nothin’ For Nothin’”, “In From The Outside” or “Back Home Again” that have made the album last for 30 years now. These songs are as classic Hard Rock as it gets, the dynamics in the music is fantastic and the choruses are catchy without being gnawed and repeated to infinity. Since the album is well produced it perhaps is no wonder it has aged well and still holds the same high standard today as it did back in 1986.

CINDERELLA has many more really fine moments than “Night Songs” of course. Follow-up “Long Cold Winter” is just as strong but my favorite is the 1994 release “Still Climbing”. Still it is always the first that sticks the hardest and I feel the same excitement today picking up “Night Songs” as I did back in the days.