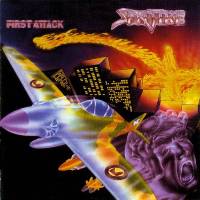 This is the pride of my country. Needless to say, Greece had minor - if any - Metal exports in the early and mid-80s and when this album was released it was welcomed with big enthusiasm by the local Press and fans alike. Greece was in a worse situation than - no offense - many African countries at the time and saying that you are a Metal musician was as rare as dating a nun at her prime. Big labels had no interest in signing a Metal band, small labels did not exist and musicians virtually had no gear to even jam at the studio (if such a room existed - in Athens only).

SPITFIRE took shape in 1984 by guitarist Elias Logginidis and soon started to record demos of their own material. In 1986 the EMI label offered them a contract and the result was the herein presented album. Along with the release of “First Attack” the band also opened for the mighty SAXON in Athens and local shows followed just before singer Dinos Kostakis had a tragic accident that left him nearly dead and in a coma for 5 years. This was the beginning of a bad era for the band that has since then undergone various lineup changes but still tries until today to play Heavy Metal from the heart by fans for fans.

“First Attack” boasts maturity but also has a nerve rarely seen in a non-commercial country. All eight songs are hitmakers, the guitars are blazing riffs and the solos are immaculate. The rhythm section spits fire (huh) and the lead vocals are illustrious and breathtaking. The style surely is classic Heavy Metal influenced by the British School and some of the German scene but also has a clear Hard Rock vibe in the main harmonies. This piece of rarity has its powerful moments but also includes two wonderful ballads that will send shivers down your spine. The rest is the epitome of mastery from an energetic outfit that had all the fonts to climb up levels in the worldwide Metal climax.

Sadly, the tragic accident of the band’s singer plus the fact that this band was coming from Greece resulted in the mainstream European Press showing no interest at all – Kerrang! magazine wrote that locating a Heavy Metal band from Greece is like trying to find a virgin lady in a MÖTLEY CRÜE tour bus… Nonetheless, “First Attack” shined on when it was released and it continues to shine on as maybe the most integrated and passionate release from a Greek traditional Metal band. It’s no wonder why collectors from all over the world try to get hold of the original vinyl at ridiculously high prices but it’s also no big news why, as soon as you listen to the album. The CD is sold at reasonable prices (I think) so get hold of this genuine gem right now and feel the fire of melodic Heavy Metal the way it was played by neat enthusiasts back at the 80s.