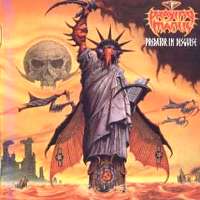 When the New Wave Of British Heavy Metal phenomenon burst out it was quite clear that it was something more than a movement, while it definitely held more than one signature sounds up its sleeve. I mean, how close were ANGELWITCH and MORE, VENOM and TYGERS OF PAN TANG, CLOVEN HOOF and DEF LEPPARD? Time did tell and most of the bands disappeared into oblivion while others became huge Metal acts. And some minor examples went their own way into other fields; one such case was PRAYING MANTIS.

The British outfit was among the first bands which recorded songs for obscure singles or compilations and for this, was credited as one of the godfathers of the movement, circa 1979/1980. The “Time Tells No Lies” 1981 full-length debut is still considered as one of the most representative pieces of the NWOBHM style but - like I said - what style should we be talking about here? Well, the MANTIS’ vibe was quite melodic for its time and it was possibly only the production and mixing that sharpened what the listener was hearing from this LP, else the songs were quite ‘sweet’. Anyway, this disc was the only LP seen by the (then) quartet until the Japan 1991 tour coinciding with the 10th anniversary of the debut release, resulting in the band fully reuniting for a follow-up disc. And, hell yeah, what a comeback that was!

I bought a vinyl copy of “Predators In Disguise” (yes, a Japanese vinyl release with OBI and insert exists!) back in the mid-90s and was immediately blown away from what I heard. With the addition of none other than Dennis Stratton (IRON MAIDEN, LIONHEART) and Bruce Bisland (WEAPON, WILDFIRE) in the band’s ranks, the Troy brothers delivered such a high-octane melodic Hard Rock album that few could and still can resist to. Starting with the vocals, it’s quite impressive what a hell of a job has been done in the choir harmonies; you’ll find yourself over-amused with the refrains and the choruses sung by all members. The main vocal duties are held by both Chris Troy and Stratton and they both deliver the goods at ease. They are at the forefront of some illustrious material anyway, to say the least. There are no main riffs here as the band plays with the melodies perfectly having them mixed in guitar/keyboards crossfire. The dual leads are immense and you won’t get bored by their fluent existence in the album. Not to forget, the rhythm section does its job adequately too and the outcome is an album you’ll full enjoy if you like your Hard Rock clad in sweet melodies and impressive hooks.

Following the success of “Predators In Disguise” in Japan and some European countries, PRAYING MANTIS decided to continue recording and releasing their own music until today. And I’m glad they did, since enough of the band’s later discs are excellent too. But the first stone placed was this little 1991 gem and we should not forget it...