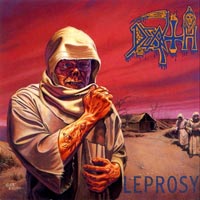 Somebody should write a few words about this masterpiece you it may as well be me. When “Leprosy” came out in 1988, Death Metal was in an embryonic state and was trying to differentiate itself from the rest of Metal genres. Beyond a shade of a doubt, the guy who could only be the pioneering persona to clearly define the genre was the mastermind called Chuck Schuldiner. Prompted by the Thrash hype and being inspired by the old Metal riffmeisters, he gave to the world a sonic creation that since then has his own unique stamp. The growling vocals with the clear spelling, the distorted guitars, the disciplined rhythm and the sick lyrics were something that had never been performed in this way.

The album begins with the title track with sick lyrics and the power to scare the shit out of you, especially if you synchronize your brain with the music and the lyrics simultaneously - yeah, very few pieces of art can achieve such an impact on you. The dark riff with the melodic touch, the growling outburst and then the chaos which leads you to a highly addictive chorus is a powerful mix. Chuck always paid attention to the detail and even if this is an early and simple(r) album as compared to the later ones, you can detect that there is something on the composition which is not generic. “Leprosy will take control and lead you to your death...”

All the tracks in “Leprosy” got that sort of melody-mixed-with-sickness kind of feeling - SLAYER could do that too - and although “Choke On It” or “Open Casket” are examples of high inspiration, I believe that “Pull The Plague” stands higher than any other song in this album. It is not a coincidence that DEATH used to end their shows with this one, as over the years it became probably the fans and band's most favourite song. The most creepy and in many ways sad thing with this song is that its lyrics were somehow prophetic of Chuck's future. When he screams as if he begs over-enraged “Why don’t you... pull the plague” I cannot help it but only thinking about his untimely escape from our vain world.

A presentation on “Leprosy” would be unfinished without mentioning the rest of the band members; Rick Rozz on guitar and Bill Andrews on drums are not band fillers but equally driving forces too. A characteristic example of their ability is the album “From Beyond” of the band MASSACRE, which they formed as soon as they had ended their cooperation with Chuck. And of course nobody could overlook the amazing production of Dan Johnson and the engineering contribution of somebody called Scott Burns at the not as famous back at that time Morrisound Studios in Florida. By the way, the sound of “Leprosy” created a whole trend on the extreme Thrash/ Death Metal genre.

“Leprosy” is dark, extreme and at the same time very melodic too, but what it makes it a true monument of the extreme sound after 28 years since its release is its ability of surfacing emotions hidden in the Spinalonga [leper colony in Greece from 1903 to 1957] of your heart and brain and giving them an artistic way out, which let's be honest more or less we all need to exhaust and drain somehow...